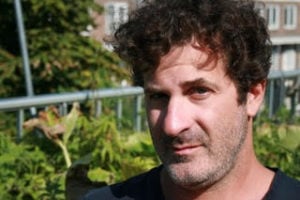 Erik is an American fiction writer living in Amsterdam with his three sons, his wife, his dog, and his cat. He has been teaching writing for nearly twenty years and has been published widely including The Atlantic Monthly and the New York Times. He often writes about autism, disability, cycling, family, and being an ex-pat. His latest novel, To The Mountain, is about a father who loses his autistic son in the mountains of Colorado during a blizzard.

There are two kinds of forty-year-old men: those who are broken and those trying desperately not to break.

The latter are the least interesting, universal in their own way: graying, skinny-jeaned marketing executives ignoring their children while dominating conversations with digressions about the popularity of their SoundCloud playlists. Their language has a brittle, honed persuasiveness, a polished shield against the indifference of a culture whose fetish is youth.

The broken forty-year-old men, however, dot and litter the landscape, men just as comfortable alone and facedown in a dive bar as they are in a fading marriage. Men who have lost so badly and so often, they deal with life as they do with their extra unwanted pounds, humorously and gracelessly, men like myself, a man snapped, then disharmoniously reassembled in an awkward representation, a midquel bereft of the original cast.

My childhood neighbors, the Korean and Vietnam war vets, spent evenings on their porches, waving hello with frosted plastic glasses, their exuberance weighted by liquid depressants. In the early morning, they gave penance, trimming their hedges, mowing their lawns, mowing half of ours as well. Broken men holding their worlds together with ancillary gestures. These men became my role models, middle-class, middle-aged men forever championing my success, tirelessly urging me to embrace the same world that had broken them