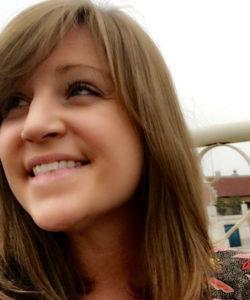 Alissa is a freelance writer and ESL teacher based on Alaska’s Kenai Peninsula. Knowing that the chief attribute of a great storyteller is having great stories to tell, she’s done stints in the arid, sun baked desert of Arizona, a sea turtle conservation on a wild jungle beach in Costa Rica, the rugged and unapologetic beauty of the Pacific Northwest, the heavily spiced smogginess of Thailand and finally the vast and stark grandeur of America’s last frontier, Alaska. Today she divides her time between Alaska and Southeast Asia. Tomorrow…to be determined.

As a StoryTerrace writer, Alissa interviews customers and turns their life stories into books. Get to know her better by reading her autobiographical anecdote below

THUD. I crumpled into a pile, clutching my head.

“You’ve done it, haven’t you,” it wasn’t a question. My friend Nicki popped her head up from the lower bunk, eyes widening with only a hint of mirth.

“Uh huh,” I respond through my hair. I could feel a hot, thick trickle dripping down my temple. When we booked the hostel, we both noticed how close the top bunk was to the fan. We joked about the probability of it whacking me in the head. That joke turned out to be a premonition.

Nicki guided me down to the reception, pressing a sock into the wound. Hotel Puerto Viejo must have been built sometime in the ’70s but seemed to remain unchanged in all those years. Faded murals and peeling surf posters covered the walls. The owner was sitting behind the counter watching a tiny 10×10 inch TV with bent antennas.

“Yeah, uh, thanks. Do you happen to have a first aid kit?”

He looked at me, concern mixed with excitement. Then his eyes lit up, and he shuffled around in the desk. He held a small tube victoriously above his head.

I looked at Nikki from under the blood-soaked sock. She shrugged. It was apparent there weren’t many options. I laid my head on a table and let the 65-year-old, ex-pro surfer superglue the gash on my scalp.

We continued down the Caribbean coast of Costa Rica to Panama. We went to a carnival in Bocas Del Toro and danced so hard the air thickened from the brown dust that rose from our pounding feet. Nicki left me somewhere near Sixoala. I wanted to stay, she wanted to go.

I met with another group of travelers and in the next week had rented a scooter, rode through a banana plantation, jumped off a giant waterfall, was a guest of the Bribri tribe in a remote village, got robbed (twice), had my keys stolen by a crab, got locked inside a small bungalow, and had to scream like a banshee for help.

By the time I made my way back to her hostel in San Jose, I was a ratty, disheveled, beat down shell of my former self. I had lost a large clump of hair in the fan accident and hadn’t packed a hairbrush.

She opened the door and gaped at the sight of me. I had a bandana tied around my head. I had one matted dreadlock, half dead hair, half live hair, twice as long as the rest. I was Jack Sparrow.

Remembering the whole journey now seems like a dream sequence, a movie montage set to a Zappa song. Sometimes I believe it never happened. Then I run my hand through my hair, and my fingers always seem to find the superglued scar. 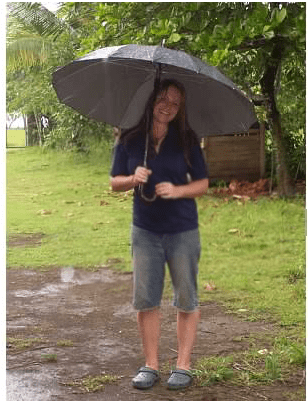 Start working with Alissa F today!
Get in touch