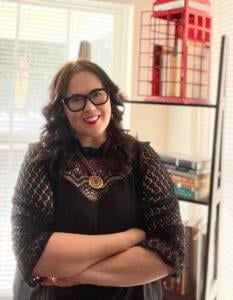 Alex is a professional writer and academic from Columbus, Ohio. She has a Masters in English from Ohio Dominican University and is currently working on her PhD in English Literature at Kent State University. Alex has over a decade of experience telling stories. From short stories to film scripts, comedy sketches to copywriting, investigative research to ghostwriting, Alex knows the art of crafting narratives to fit specific mediums. Alex also enjoys tabletop games, true crime, and animals of all kinds (but especially her dog Henry).

As a Story Terrace writer, Alex interviews customers and turns their life stories into books. Get to know her better by reading her autobiographical anecdote below

Monumental moments of my life all seemed to happen in cars. There is something strange, beautiful, and maybe a little sad about the trajectory of life shifting within the confines of a structure that is meant to be in motion.

This moment was November 10, 2012, and I was on my way to collect someone who would become the single best friend I have ever known. It was a journey I had recently taken, and a road I had traversed that had ended in heartbreak. Six months earlier, I had met Rupert. He was tiny and scruffy and perfect. He would curl up beside me in bed and inhale his kibble as if it was the last meal he would ever eat. His joyful howling in such a specific way caused me to give him the nickname “Rupie-Roo.”

To me, Rupert was the first truly adult decision I had made at twenty-four years old. Getting a dog. Keeping another living creature alive besides myself. And six months after making that monumental decision, I utterly failed in my endeavor as a dog parent. I dropped Rupert off at the vet’s to be neutered, like any responsible dog parent would do. As they prepped him for surgery and delivered the sedative customary before administering anesthesia, his heart stopped. The veterinarian said it was a freak accident, a one in a million occurrence. But it didn’t stop me from feeling like a complete failure.

In the days after my grief and tears, my mom asked me if I’d like to get another dog. She gently said that she believed it could be healing for me. I wasn’t necessarily convinced, and I hated the idea of replacing Rupert. But I wanted to believe that she could be right, that I could keep a place in my heart for Rupert while making room for someone new.

We made the ten-hour trip to meet Henry, and I spent ten hours riding back with this tiny fuzzball in my arms. He clung to me, at first shy but quickly inseparable. Nine and half years later, he still needs to be as close as possible to me. We’ve taken many trips in the car, and while he’s too big to carry now, he makes sure to put his head on my lap for every journey, whether inconsequential or monumental.

Start working with Alex C today!
Get in touch