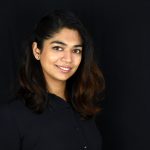 Sukriti grew up in Mumbai, studied in London, and found herself in New York City. Her work is published in The Times of India, Quartz, Vox, and others. Sukriti holds an M.F.A. in Creative Nonfiction from Columbia University, where she was Publisher of Columbia: A Journal of Arts and Literature. She also holds a B.Sc. in Managerial Economics from the London School of Economics. She attended high school at Dhirubhai Ambani International School, Mumbai.

As a Story Terrace writer, Sukriti interviews customers and turns their life stories into books. Get to know her better by reading her autobiographical anecdote below.

Many generations ago, my family used to be very rich.

My great-great…-great-grandmother, I am told, was the daughter of the king’s favorite minister. (Which king, I’m never told. But I dutifully imagine a palace somewhere in India full of fountains and peacocks and perfumes, bordered by dark-green forests.) She knew how to ride a horse; she could hunt with a bow and arrow.

My great-grandmother’s family lived in Punjab but on the wrong side of the border. When they fled from Pakistan to India, I am told, they dropped pieces of gold behind them—gold coins, gold anklets, gold bangles, gold chess pieces—which their bloodthirsty pursuers would keep stopping to pick up.

My great-grandmother grew up in Mumbai, poor, but a renowned beauty. (Renowned by whom, I’m never quite told.) Statuesque and cold-faced, draped by a sheet of waist-length black hair, she’d attract so much attention on the street that, at the early age of twenty, she took to wearing only plain, white, unembellished saris.

My great-grandfather was no looker, but had a renowned wit. He once debated the Ramayana with five priests in pure Sanskrit for three days and three nights on Chowpatty beach in front of an audience of thousands, and at the end, the learned priests bowed to him respectfully and left Mumbai forever.

My grandmother has told me such stories and more since I could remember. Some are epic, some self-deprecating and funny; some make me admire my roots, some leave me saddened; some go from rags to riches, some the other way around. But the moral is always the same: We come from money. We come from grace and culture. We come from courage. We come from beauty. We come from intellect. They’re the kind of family myths all of us build. The kind of stories we’d like told of ourselves.

I became a writer because of a dangerous sentence in a Milan Kundera book: “Only artists and statesmen become immortal,” it read. “Immortality,” I answered to my writing professor at university when he asked why I wrote. He chuckled a lot.

I find it funny now too (in a depressing sort of way), but sometimes, I tell myself, I don’t mean the immortality of a million published books in 80 languages and a fancy prize. Sometimes, I just want to write how I’ll be remembered into the stories my granddaughter will tell hers.

Get in touch today to work with Sukriti!