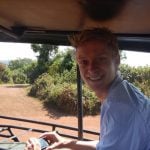 King of the bongo bong

It was another hot night in Dar es Salaam, the Tanzanian metropolis where I was just starting to find my way around. Two months in, the integration process was going rather smoothly. I was on my way home from a date with a girl who made me weak in the knees and light in the head, and there was absolutely nothing that could spoil my mood – not the late night heat, not the fact that the city had been hit by yet another of its notorious ‘power cuts’ (causing near-total darkness), and certainly not the light drizzle that was readily turning the dirt side road I was walking on into a muddy mess.

Strolling slowly, I looked to my right and noticed they were showing a football game at the generator-equipped restaurant by the other side of the road. With the ever-comforting sight of a green pitch and the prospect of cold Kilimanjaro beer, the decision to head there was easily made. I crossed the main road and entered a patch of grass. Separating me from another patch of grass – the one leading to the restaurant entrance – was a wide, sinister ditch that contained unspeakable things and spread an unspeakable smell. To cross it, I was required to walk over a plank which, although of undeniably modest width, looked rather steady at first (limited) sight. I stepped on and walked and was almost there.

Then there was a crack. And a splash.

The Swiss adventurer Nicolas Bouvier once remarked that ‘You don’t travel in order to deck yourself out with exoticism and anecdotes like a Christmas tree, but so that the route plucks you, rinses you, wrings you out, makes you like one of those towels threadbare with washing that are handed out with slivers of soap in brothels.’ How right he was. Well-nigh face down in a Tanzanian ditch, covered in – what was it, shit?, there was nothing I could do but laugh out loud. Here I was, self-proclaimed king of the bongo bong, hopeless dimwit, left in, let’s say, quite an unflattering condition. This, I knew, was my true baptism as the African adventurer I had always wanted to be.

Everything happened fast from there. A restaurant waiter who had seen it happen came rushing towards me to pull me ashore, miraculously keeping a straight face and repeating pole sana (Swahili for ‘I’m very sorry’) at a discreet whisper. He took me – past a table full of flabbergasted diners – to the personnel washroom, told me not to worry and, after I had spent what felt like an hour scrubbing off the ubiquitous dirt, handed me a wife-beater and an XXL pair of trousers. A washing lady, may she be blessed for the rest of her days, took care of my sorry clothes.

I made it for the last half hour. To my pleasant surprise, the match turned out to be England – Holland, with nearly everyone present supporting the home team. The cold Kili was the best beer had I ever had. When Arjen Robben, at a packed Wembley Stadium, won us the game by scoring 2-3 in the dying seconds, I got up from the table, screamed and fist-pumped like a hooligan, felt that delicious mixture of mild embarrassment, outlandish pathos and twisted exhilaration that has fuelled many weird African experiences since, and knew I would always stay a traveller.

(This story was first published on BohemianBirds.com)