Nicky was born in the Midwest but spent her formative years in a suburb of Portland, Oregon. After moving back to Minnesota and completing high school, she attended the University of Wisconsin – La Crosse, where she discovered her passion for business and communication and earned her bachelor’s degree in marketing. After graduating, Nicky traveled to Australia and New Zealand with friends. Upon returning home she was not ready for the adventure to end, so she packed her bags and move to Los Angeles. Determined and excited to explore what the West Coast has to offer, Nicky enjoys spending her free time hiking with her dog, taking road trips, discovering new places, and meeting new people.

After moving to Los Angeles, it took me a couple weeks to truly settle in. After all, Hollywood doesn’t exactly operate at the same frequency as small-town Minnesota. One day, after I felt like I had everything figured out, I confidently walked into Trader Joe’s with my new reusable bags (the first purchase one makes when moving to L.A.) ready to grocery shop for the week.

I bought everything I thought I needed and more. Granola, butter, veggies, fruits, bread, and of course a few bags of chips (incase a midnight snacking situation were to arise). After returning home, I put all of my groceries on the counter and went into my bedroom to change, because I always seem to forget that L.A. feels a lot closer to the sun come 1:00 p.m. After emerging from my room approximately two minutes later, I went out to the kitchen to unload my groceries.

Quickly, I realized that many of the items I thought I had purchased were missing, namely the bread, butter, and chips. After reading the receipt and learning that I did in fact purchase all of the items, I grabbed another bag and walked back to Trader Joe’s with the receipt, convinced I had left the missing groceries at the store. When I got there, the woman who checked me out was certain that she had watched me put everything in the bag, even remembering how she made sure to advise me to put the bread at the top of the bag, in order to keep it from being smashed. Once she said this, I remembered that I did indeed walk out of the store with all of my food … so where did it go? Walking home for the second time, I kept an eye out for anything I may have dropped, but wasn’t able to find anything. I returned home, completely baffled. How did the groceries disappear soundlessly, and why only the bread, butter, and chips? I looked all around the house but found nothing. I was convinced this mystery would never be solved.

Two weeks later, I was in the backyard watering the flowers, and saw something in the dirt. Curious, I grabbed it and quickly realized I had unearthed the lid of the butter container from two weeks prior. I began to run around the backyard, eventually finding the bread bag, butter container, and bags of chips. It was clear that they had been depleted of every crumb and then buried in different parts of the backyard. And, as I ran around the backyard, I realized I was being watched the entire time by the culprit himself. My sneaky, devilishly handsome, large, but apparently silent, Irish setter, Riley.

I think someone may have figured out Los Angeles a lot quicker than I have. 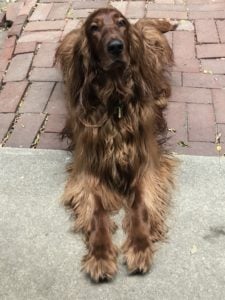