Last April, Row and Tom Smith were celebrating a successful climb to Tsergo Ri peak in Langtang, Nepal when they were caught in the aftermath of an avalanche – at least, that’s what they originally thought. Later on, they, along with the rest of the world, realised that they were almost at the origin point of the 8.9 Richter Scale quake that devastated the mountainous country which is now known as the “Nepal Earthquake”.

Exposed to the disastrous power of nature, their hiking group was escorted back down the mountains to the valleys where they saw the true extent of the damage. Buildings had collapsed. People and livestock alike were trapped in debris, some badly injured and others lying in the streets beyond help. 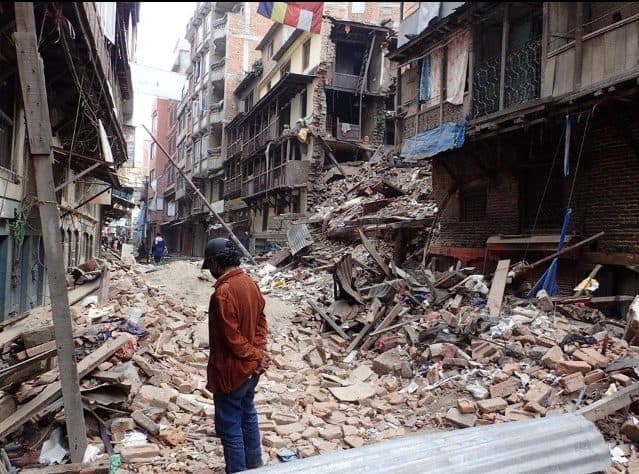 After three days spent battling for survival, Row and Tom were evacuated and returned to their home country (along with many tourists visiting Nepal at the time). Feeling the effects of survivor’s guilt and undergoing treatment for PTSD, Row threw herself into fundraising activities, giving as much back as she could to those who had helped her return home safe despite their own uncertain fates. This February she approached Story Terrace with the plan to write a book of her experiences with the help of our ghostwriter Emma Donnan, and so ‘The Earth Moved’ became our first public StoryStarter project. After funding the production cost of the novel, The Earth Moved will be available for sale, with all proceeds going towards charities Community Action Nepal and Doctors for Nepal.

Last Monday marked the first anniversary of the Nepal Earthquake, news sources were covering the recovery efforts of the country and interviewing survivors. Row was featured on several news sources such as LBC Radio, BBC Radio Live, The Middlesex Times & The Telegraph where she was interviewed about her experience and her novel. The most notable interview of the week was an appearance on ITV’s weekday morning news and talk-show Lorraine, with Lorraine Kelly, who featured a segment on the recovery of the country on the anniversary of the Nepal Earthquake.

Here are a few words from Row about the past week: 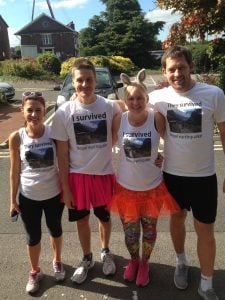 As you can imagine, I’ve had an emotional and exhausting week. I’ve recorded several radio interviews and have spoken to the Press Association who have agreed to feature my story on most of their online networks.

My biggest achievement this week was going on The Lorraine Show. It was the day of the first anniversary of the Nepal earthquake, so it was incredibly difficult emotionally as well as nerves setting in. Lorraine soon put me at ease when she told me in between the adverts how she used to be a reporter and was often first on the scene of tragic events. She said she knows so well how PTSD can have a huge impact on everyday life. I found this upsetting that she has been exposed to such trauma herself and also comforted to know she has some understanding of our experience. I am so grateful to everyone who is helping my campaign to raise awareness for Nepal.

Please help me to reach this target so I can start raising some money for Nepal. Thank you!

Click below to watch the video for Row’s StoryStarter campaign!

You can support and donate to ‘The Earth Moved’ at www.mystorystarter.com/Nepal

Nepal Earthquake One Year On: The Earth Moved May 4th, 2016Theo Brainin