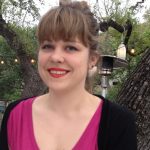 A New York City resident for over fifteen years, Melissa spent the first half of her life in North Carolina where she cultivated her appreciation for quiet beaches and tomato sandwiches. She has an MFA from New York University and currently edits Bodega, a digital magazine of poetry and prose. She’s at work on a collection of stories, several of which have appeared in recent publications online. Beyond writing, Melissa loves taking walks with her pug, playing Boggle, and tending her indoor garden—most recently she’s coaxed lemon and lychee seeds to sprout.

As a Story Terrace writer, Melissa interviews customers and turns their life stories into books. Get to know her better by reading her autobiographical anecdote below.

How a Dog Does Multiplication

“What would you do if a baby ate a penny?” On the other end of the line, my dad, a gastroenterologist, paused before answering.

“What are you asking? What penny? What baby?”

“It was Gus. Gus ate a penny,” I said, referring to my eight-year-old pug who I estimated to be roughly the size of an infant.

“I thought I missed something big,” my dad joked before recommending giving it 24 hours to pass and feeding Gus some extra roughage. Luckily, Gus also loves to eat vegetables.

That morning, I’d walked with Gus to the corner deli to buy milk. My change was exactly one cent, and on the walk back home, Gus looked up at me curiously. My dog-human communication skills indicated he was asking, “What’s in your hand? Is it food?”

“Gus, this is a carton of milk and this is a penny, you goof.” I gripped the penny between my thumb and forefinger and showed it to him. He sniffed it, opened his mouth, and swallowed it before I could get a better grip on the coin or retrieve it from his mouth like I’d done with numerous other things over the years (chewing gum, table scraps, tissue paper).

I followed my dad’s advice, but the next day, although Gus seemed fine—hungry and energetic—I called the vet for dog-specific advice. He asked that I bring Gus in immediately, explaining that pennies minted after 1983 have a zinc core, which makes them more toxic than the 100 percent copper coins. Before taking x-rays, the vet asked, “Are you sure he actually ate the penny?”

“I am,” I whispered and started to cry, “because I fed it to him.” The vet tried to comfort me with a story of another dog owner whose dog had eaten a full jar of change. After an operation to remove the coins, the owner showed the dog the change, and the dog gulped it all back down.

At the time, I didn’t find this funny at all.

That afternoon, Gus had his own surgery for which I happily paid many, many more pennies to retrieve the original I’d showed him days earlier. He recovered quickly, and now is a twelve-year-old pug, retired from all coin-eating. And the original penny? It lives in a sealed jar, a reminder to never show Gus anything that isn’t edible, even if he asks. 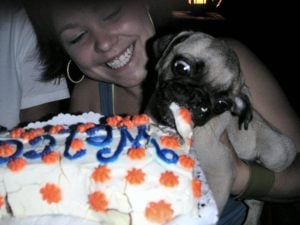