Libby earned her B.A. in journalism at the University of South Florida, while honing her skills in a delightful variety of part-time writing positions. She spent 2016–2018 as a staff writer at the Tampa Bay Times, using her professional people skills and sense of humor to get extraordinary stories out of ordinary people. Her other passion is whales, and she has spent every summer since 2011 as a deckhand, naturalist guide and, as of 2018, a USCG-licensed captain on whale-watching boats in the Pacific Northwest.

As a Story Terrace writer, Libby interviews customers and turns their life stories into books. Get to know her better by reading her autobiographical anecdote below.

As a doted-upon only child, I’ve never shied away from expressing myself—often loudly and in public, much to my mother’s chagrin. I did, and still do, have an answer for or comment about most everything.

But one July day, over 20 years ago, as I sat in a rubber boat called a Zodiac on a chilly gray morning, I saw a wild orca for the first time, and words fell utterly short.

I have been in love with killer whales my entire life. I cannot recall a time that it was not part of me. I was born to help save these magnificent creatures, by sharing my passion with others through my work as a whale-watch captain and naturalist guide.

My parents have always supported this dream; fortunately, they never told me to find a “real job” instead. So when I was just twelve years old, they surprised me with a trip to whale ground zero: British Columbia, Canada, which hosts a robust population of resident orcas. We traveled 3,500 miles from our home in Florida to the northernmost tip of Vancouver Island; my mother had done extensive research to find the very best place to see the ocean’s top predator.

There are a handful of moments in life so vivid that you can replay them in your head, frame-by-frame, no matter how long it’s been. One or two of them change you forever.

The glass-calm, 50-degree water was nestled a fog so thick, it concealed the vast expanse of evergreen forest and even the mountains, silent sentries forever keeping watch over this sacred place. Myself, my parents, and our captain, Robert, sat quietly in our little craft, the sole mariners out that day. I had kept up a nervous litany of whale facts to Robert on the journey out, desperately wanting to prove that I belonged here.

But somehow I knew just when to stop talking.

Suddenly, the intense quiet was shattered by the unmistakable “WOOSH” of an orca exhaling, forcing moist air out of its lungs at speeds of up to 100 mph. I heard the sound, before I saw the orca; it was then that I forgot to breathe.

For the very first time, I saw the noble black dorsal fin, slicing through the surface like a hot knife through butter. Then another, and another, and another, until we were surrounded by whales. These animals were just going about their day—swimming, foraging for salmon, spending time together as a family. They couldn’t have known their ordinary day was the one I realized that my life belonged to them.

My father, who had been assigned the role of family videographer, despite his questionable skills, dutifully kept the camera rolling. The footage does not include my face, but it picks up my parents’ exchange as they bore witness to the seminal moment of their daughter’s life.

“Libby, what do you think?” my mother tearfully, breathlessly exclaimed.

I couldn’t respond. I didn’t even register her question until I watched the video later. 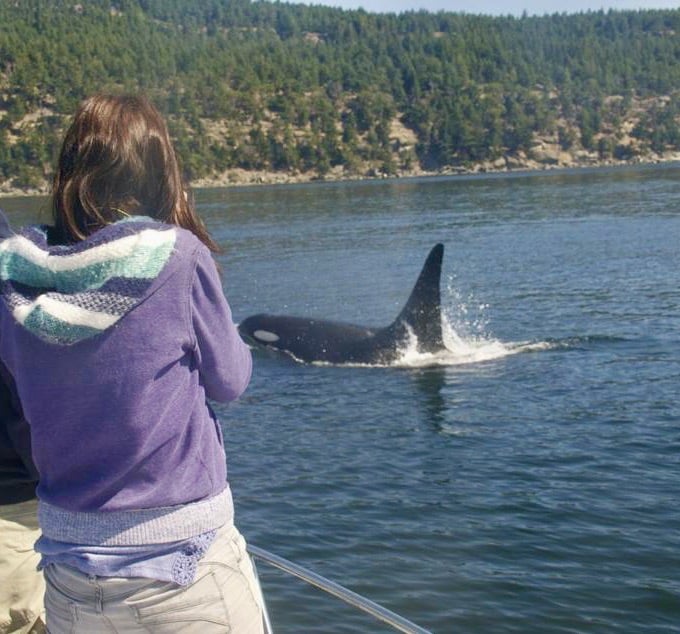 Get in touch today to work with Libby!