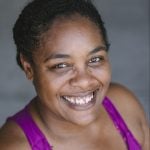 Kimberlee is a freelance writer, yoga teacher, and co-author of the Freedom Writer’s Diary, a collection of autobiographical short stories, a New York Times Best Seller, and the basis for the Paramount Feature Film, “Freedom Writers.” In addition to writing under her own byline, she works with entrepreneurs and business executives to provide ghostwritten editorial contributions for a variety of digital publications. When she’s not in her writing cave, you’ll find Kimberlee at her favorite local studio taking or teaching a yoga class.

As a Story Terrace writer, Kimberlee interviews customers and turns their life stories into books. Get to know her better by reading her autobiographical anecdote below.

I knew it was coming. It’s part of what football is about after all: that willingness to run full force into another human being in the name of the game.

I looked around the field and saw the other teams doing various versions of first day contact and feared for my skinny little skater boy. One of the three defenders was going to hit him. My heart raced as he got closer to the front of the line and other boys walked away either pumped or looking shocked. Was the boy really ready for this?

The answer quickly became no. He cried after being hit and was sent to me to get some water. “They crushed my rib!” He snatched off his helmet as I assured him his ribs were fine. “No, seriously. I heard it crunch.”

I touched his ribs, poking and watching for signs of pain. Nothing. “You’re fine,” I said. But I wanted to take my baby and go home. Still, I resisted the urge to coo sweet mommy-ness all over him when he said he wanted to go home.

“Just get through practice,” I told him.

He looked toward the field and pulled his helmet on. “How much longer?”

I was snapping his chin strap. “Yep.”

I pulled his face mask close. “No fear, boy.”

He nodded and ran back to the line.

Other parents kept asking me how the boy was doing. He was a little intimidated, I told one dad, and rightfully so, I wanted to add. The same dad offered the boy some advice when practice was over: stay low, keep your head up and keep your feet moving.

I went over these three things with the boy later as we did some stretches before bed. I also told him about overhearing the coaches and parents talking about the kids who would give up before the week was over.

“Do you want to be one of those kids?”

“Look at me,” I said. “Are you going to be one of the kids who gives up the first week of contact?”

The boy lifted his chin and looked me in the eye. “No.”

“Alright,” I said. “Now get your stankin’ ass in the shower.” 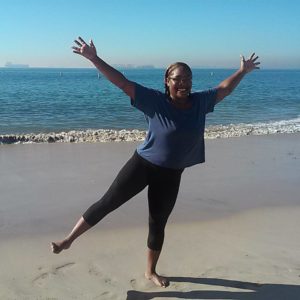 Get in touch today to work with Kimberlee!