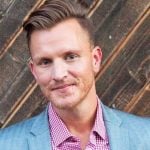 Jeremiah’s passion resides in people and their stories, and he believes writing to be the avenue to both. This ardor first developed with his BA in Sociology, and then in Poetry. He now attends Wilkes University on scholarship for an MA in creative non-fiction, where he is writing his memoir. With a focus on personal narrative and storytelling, he has represented Phoenix, AZ at three national poetry events. His non-fiction won the 2016 Etruscan Press Prize, and his poetry has been featured by TEDx, in radio shows, museums, and college courses.

As a Story Terrace writer, Jeremiah interviews customers and turns their life stories into books. Get to know him better: you can read an autobiographical story of his own below. Get in touch today to work with him!

All I Want for Christmas

All I want for Christmas is my two front teeth are the first song lyrics I learned, and far earlier than most. Aged two, I was splashing around playfully in the bath tub, surrounded by floatable plastic toys, when my excitement caused me to slip forward and bang my teeth on the wet porcelain, pushing them back in the direction from which they grew. My dad and I arrived at the dental office so early the assistants had yet to punch the clock. “I’m trained as an EMT,” my dad announced, and the dentist said it would have to do. Too young for pain medication, I was given amnesia drugs, and my dad held me tight while the dentist pulled with a set of glorified pliers.

In my early twenties, I was standing in the kitchen of my new condo when the quiet of the afternoon was delicate enough to hear the dull wiggling of my two front teeth against the tinkering of my tongue, as I envisioned the moment I chased another basketball player down the court and flipped over his back. These porcelain replacements of my childhood Christmas wish always loosen after a few years of use. And when my proclivity for large sneezes struck again, I was left scouring the kitchen floor on hands and knees to cartoonishly pop one of them back into its place. A week after, I was sick to my stomach and the same tooth went missing for good. When my family found me immobilized in bed from the sickness, they rushed me to the hospital, where an x-ray uncovered a mysterious mass. The tooth was safely cradled away in my lung.

Shortly after turning thirty, while riding my bicycle on a crisp and sunny Arizona day in March through a busy intersection, my mouth became an impersonation of a bear hug, wrapping itself around the edge of a car window. Awaiting facial surgery, my family had to convince me to allow the doctors to wire my jaw shut for five months. On my first day home, each member of my family brought a gift to help me accommodate eating with a mouth fixed to itself like a secure mortgage rate. My kitchen was stocked with a brand new blender, juicer, countless straws and enough recipes for soup and smoothies to last an apocalypse.

Through it all, each time my teeth and I departed from one another, my family stood in the gap. My father played dentist, my mother and sister played paramedics and medical advisors, and together, they all played Santa Clause—recreating Christmas, time and time again.