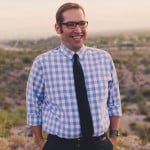 Jason grew up in the suburbs of Detroit, Michigan, a city known for its music. Now he writes about the amazing songs coming from Phoenix, Arizona, a desert metropolis increasingly recognized for the amazing artists who visit and reside in the city limits. When he’s not interviewing the bassist from your favorite band, he’s writing for companies large and small, training for endurance events, learning photography, traveling, and preparing for parenthood with his wife Kristen.

A Stroke Of Confidence

I was in the middle of a race, and a well-intentioned woman was shouting advice to me from across the pool. “Stroke, stroke, stroke, breathe,” she belted at the top of her lungs. It was my second triathlon, and it was immediately apparent to the timekeeper that swimming isn’t my strongest sport. Instead of quietly keeping track of how many lengths of the pool I was covering, she decided mid-race was a fine time to give me some swimming lessons.

For thirty-seven years of my life, I was afraid of the water. A friend urged me to finally conquer my fear, and I worked hard to learn the basics of swimming. I had planned to demonstrate my new found confidence during my first triathlon, but as soon as I jumped into the open water, I panicked. Thankfully, once I relaxed, I managed to backstroke around the lake and reach the finish line.

I decided to redouble my efforts and sign up for an indoor triathlon. Once a week, my wife, a seasoned triathlete, would coach me on breathing and improving my stroke. And now, after months of perseverance my efforts were going to waste as the race official tried to establish a rhythm for me.

None of the other timekeepers were doing this for the rest of the swimmers in the pool. I was being singled out. My wife was helplessly spectating. Normally a bastion of reason and calm, she was growing increasingly irate as this complete stranger was undoing all of her hard work. She couldn’t take it anymore. Her maternal instinct kicked in as she yelled, “Why don’t you just let him swim!?”

Her plea was unheard by the intended audience. I left the pool embarrassed. Not because my wife stood up for me, but because I knew better than to let some stranger get into my head. Moving forward, I knew I would have to not only build up more strength in the water, but increase my confidence. They say the third time is the charm. I intend to prove it.