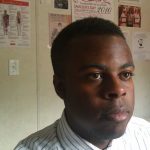 Jamar likes to think of himself as a country boy with a city attitude. Growing up, writing was all Jamar wanted to do and now he feels that he’s living his dream. He’s a journalist and ghostwriter, and his work has been featured in USA Today. When he’s not writing, Jamar spends his time listening to good music, watching good movies, or listening to the stories of good people. The latter is his favorite because he’s an avid believer in the saying, “Everyone has a story to tell.”

As a Story Terrace writer, Jamar interviews customers and turns their life stories into books. Get to know him better by reading his autobiographical anecdote below.

As soon as my auntie turned her back to walk out of the room, I spit it out. I didn’t want to, but I had to. I felt bad, because my mind raced thinking about all the times my parents had warned me to never waste food. My parents were good people, and they always tried to teach me right from wrong. They taught me to never waste food because for one, God doesn’t like wastefulness; and two, there were starving children on the other side of the planet.

I have to admit that as a child, I never understood the second reason. I would spend many days and nights trying to find the logic in that statement. While yes, there were children on the other side of the world that didn’t have food — I had seen this on TV while watching a PBS special — how would my not eating spinach change their lives?

Internally, I reasoned: if I wasted my food, would they somehow get hungrier? I didn’t think it made much sense. I was a curious child, and so I would always question these types of things. Once while thinking about this, a light bulb went off and I discovered a possible solution: instead of me wasting my food, why don’t we donate this plate to the starving children?

My mind quickly snapped back to reality as my aunt returned to the room. She pitter-pattered at the countertop for a moment, but I knew she really came back to watch me eat. With her eyes observing me, I knew I couldn’t spit out the next spoonful. I had to eat it.

And so it began. I took my spoon and circled around the plate a bit, trying to buy time. I hoped my cousin would call her from the next room, but his voice never came. And when I glanced up, I saw my aunt watching me closely. I couldn’t procrastinate any longer.

I used the spoon to deftly grab a tiny morsel of spinach (I wanted to take as small a spoonful as possible). I quickly shoved it into my mouth, chasing it down with a quick gulp of cold water, hoping to cloud the taste. It didn’t work, but apparently this display of nibbling was enough for my aunt. She smiled contently and walked out of the room.

Once she left, I stared down the food, but it didn’t move. As I examined it closely, I realized there was only one way to win this battle. It was time to move to plan B, I thought to myself. Let’s send the spinach to hungry children in Indonesia.

Get in touch today to work with Jamar!