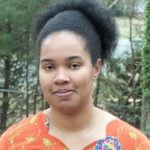 Erim began her journey as a writer when she was eight years old, saving the imaginative games she played on paper so she wouldn’t forget them as a grown-up. Today, she enjoys helping others capture their memories in memoirs and share their stories with the people they love. Her writing has appeared in Voice of Youth Advocates Magazine, Youth Communications Magazine, and Chatham Life & Style Magazine, among others. When not writing, she enjoys performing as a storyteller, spinning flower sticks, folding origami artwork, and watercolor painting.

As a StoryTerrace writer, Erim interviews customers and turns their life stories into books. Get to know her better by reading her autobiographical anecdote below.

A One-Sided Game of Fetch

Sam was the biggest, meanest, ugliest dog I had seen in all my eight years of life. He had a misshapen, wrinkly face, with an inverted mouth that made him look like he was always scowling. More often than not, his eyes were tinted an evil shade of pink— not quite red, but close enough to seem menacing. Worst of all, he had no tail— only a sorry stub that was too short to wag. If I hadn’t been so open-minded, I would have run away every time he came near.

Sam was my neighbor’s dog. He came out every so often to wander around his backyard. On days when we both happened to be outside, we played fetch. Unfortunately, Sam and I had very different ideas about the way the game was supposed to be played. A typical game of fetch went like this:

First, I scavenged a stick from a fallen tree limb. Then I threw it over the fence into Sam’s yard, as hard and fast as I could. Sam bounded after it— so quickly that his legs were a blur— but was never fast enough to catch it in midair. When the stick landed, he pinned it to the ground, lay down, and systematically ripped it apart with his teeth.

(Apparently, he didn’t understand the “bring it back” part of the game.)

It wasn’t quite the way I’d envisioned playing fetch with a dog, but we still had fun together. I always looked forward to our games. Overall, it was a pretty nice arrangement: he didn’t bring the stick back, and I didn’t have to feed, walk, or groom him.

Get in touch today to work with Erim!