With more than a decade of experience as a writer, editor, teacher, and creativity coach, Eric Sheridan Wyatt has helped hundreds of people tell their stories. Eric has a keen eye for significant detail, a knack for capturing narrative voice, and an empathetic-yet-probing style, and he knows there is an engaging story waiting to be uncovered in every life. He holds a Masters of Fine Arts from Queens University of Charlotte, and his fiction and creative non-fiction have appeared in various literary magazines and anthologies.

As a StoryTerrace writer, Eric interviews customers and turns their life stories into books. Get to know him better by reading his autobiographical anecdote below.

Some of my clearest memories—and most formative moments—center around writing.

In one of the earliest photos I have of me, I’m at work at the manual Olympia typewriter my mother had purchased. I’m wearing corduroy overalls and there is a cheap, vinyl tablecloth on the dining room table of the house on Franklin Street, in Hamilton, Ohio. It is just after Christmas: the Slinky is still in the box, and the “What’s Cooking Snoopy?” Colorforms haven’t been played with yet.

I had turned five just ten days earlier, and we would move from that house before I turned six. I can recall only a handful of images from those days: The night before my first day of kindergarten when I stood in the kitchen and cried hysterically because I was sure I would hate school; the shock and tears shed by my mother and her friend the day Elvis died; the night my bedtime prayers were to find the missing library books my mother couldn’t afford to pay for; the kerplunk of the missing books hitting the floor as they were dislodged from my hiding place behind my bed.

One thing I clearly remember is pressing those stiff typewriter keys. I couldn’t have been writing anything of substance. My vocabulary was small, yet I would sit for hours, filling pages with letters and symbols.

Over the years, many things changed. An electric typewriter replaced the manual. The typewriters gave way to a long line of Windows-based home computers. Now, I use a Mac and my iPad with a bluetooth keyboard. (And, to let you in on a creative secret: I prefer to write first drafts with a fountain pen and a notebook to any keyboard.)

What has stayed the same, over these forty years, is the primary role writing plays in my life. Whether I’m drafting a short story, tinkering with a novel, or dabbling in poetry, writing is the central activity which helps me process, order, and make sense of the world. As Flannery O’Connor put it, “I write because I don’t know what I think, until I read what I say.”

Over the years, I’ve written for myself, and for others. I’ve created policy manuals for office use, and penned newspaper op-ed pieces. I’ve quickly written print, radio, and television ads that were seen by tens of thousands, and then labored over line breaks in poems that I have shown to very few. I’ve told my stories, and I’ve helped others tell their stories.

There is something mysterious and beautiful in the process of writing; that was something I understood, even before I knew what writing even was. 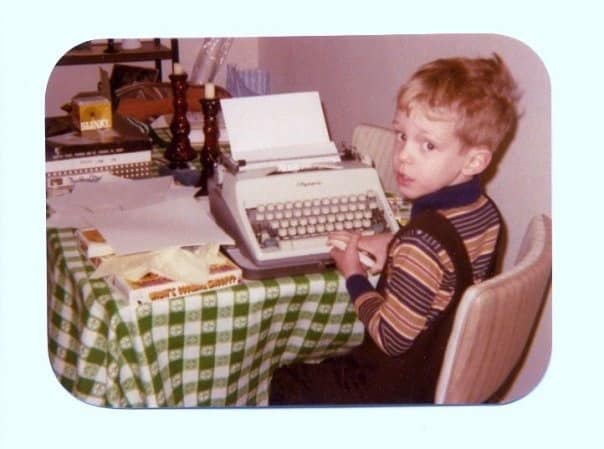