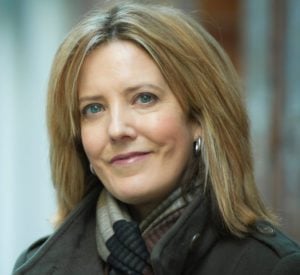 Caroline has for a long time inhabited an unusual space between entertainment and ethics. The former kept her busy in journalism for two decades, working first for the BBC, the latter took her to Australia to study, and the combination meant that Rupert Murdoch indirectly paid for her degree in Global Justice. She is now a writer and broadcaster, the author of three bestselling memoirs and always especially moved by tales of great romance and personal redemption.

As a StoryTerrace writer, Caroline interviews customers and turns their life stories into books. Get to know her better by reading her autobiographical anecdote below

An Unexpected Friendship on the Trans-Siberian Railway

I’d gone to sleep by myself, in a narrow bed, on a train making its way across Russia. I thought I’d booked the entire cabin when I got on in Vladivostok, but clearly hadn’t coughed up enough cash. Instead, I was woken by squeaks from the opposite bunk which, with glasses frantically grabbed, I was able to establish were the sounds of a bald man doing press-ups. It could have been worse.

I was returning home from Australia, this time for good. I’d spent four happy years living in Melbourne, but eventually it’s time for even the most committed ex-pat to sit down with her mother and do the Times crossword on the day it’s actually published, which meant only one destination: West London.

To keep it interesting, and to discover just how far away Australia actually is, I’d decided to head home without flying an aeroplane. Well, not actually flying it myself, obviously, but also eschewing the relatively quick passage of a passenger seat. Instead, it was boats and trains for me, sailing first to Japan, then Korea, and finally Vladivostok, where I ate a sandwich and installed myself in a compartment for a six-day ride on the Trans-Siberian Railway. By myself. Or so I’d planned.

And so my Russian – what to call him, roommate? – entered my life. All healthy, glistening head, solitary backpack and a couple of gold teeth mere twinkling hints of a well-to-do existence. I could only guess what, because he spoke absolutely no English, and my Russian consisted only of ‘Abramovich’, ‘Perestroika’ and ‘Litvinenko’, tantalising gateways into conversations we would never have.

Instead, silent comradeship began to set in. On the second morning, I brought him his morning tea. By the third, my cushions had been perfectly arranged while I was away washing my face. By day, he’d busy himself with his exercises – pull-ups from the luggage rack, press-ups in the gangway – while I read or typed in my corner.

Then, at 7pm every evening, he cleared our tiny table, laid out a chess board and its pieces, poured vodka into two rather large glasses and pushed one in my direction. And then proceeded to checkmate me in about 14 moves while drinking me under said tiny table.

For six days and nights this was our shared existence. Not a word was exchanged, no flirtatious eyelids batted, no irritation expressed, just peaceful, self-contained solidarity.

Finally, the train pulled into Moscow and we joined the disembarking hordes. I was meeting my Russian friend Marina, who had texted to say she was already in the station. My roommate insisted on carrying my huge rucksack as well as his own across the concourse, until we spotted Marina. She rushed up to us, gave me a huge hug, and then quite understandably asked, “Who’s your friend?”

I looked across at this bald, gold-toothed, exercise-loving, vodka-drinking chess enthusiast, whose quiet kindness had made my long journey so peaceful and safe, and realised for the first time that I had absolutely no idea.

Start working with Caroline F today!
Get in touch