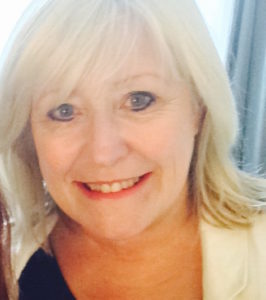 Carole has spent more years than she’ll admit to writing for newspapers and women’s magazines. To give you a clue, she was at journalism college with Jeremy Clarkson but says she’s definitely younger than him. After qualifying, Carole joined the Sheffield Morning Telegraph, Yorkshire Post and Lancashire Evening Post before turning freelance. She’s covered hundreds of national in-depth real life and celebrity stories and worked closely with the lovely, late Lynda Bellingham. Recently she ghost wrote her first book for Simon & Schuster which was a Sunday Times bestseller.

As a Story Terrace writer, Carole interviews customers and turns their life stories into books. Get to know her better by reading her autobiographical anecdote below

A Ghost Story From the Past

Arriving back home from parents’ evening, my father had a mock cross look on his face. Grabbing hold of my arm, he pulled me up off the settee (never called a sofa in my bit of 1970s Yorkshire), on to my feet, and marched me through the lounge to the frosted glass back door.

“Get out and stay out. And don’t ever come back!” he ordered as he flung it open, gesturing for me to step out into the cold night air.

Bemused, my eleven-year-old self hovered on the threshold in my dressing gown and slippers, searching for a clue to his odd behaviour. Then the penny dropped. His face broke out into a broad smile and I shyly acknowledged the reference to a piece of writing I’d done that was pinned up on the classroom wall.

“I don’t want your teacher to think that’s how you’re treated at home!” he laughingly scolded as I made my protests.

Too young to even dream I might make a career out of stepping into other people’s shoes to bring facts to life in a simple, engaging fashion, as I just had, I spluttered out my explanation. The first person piece was part of a geography project we were doing in Mr Cudworth’s top junior class about the overcrowded slums of Naples. There, children my age were thrown onto the streets by impoverished parents. I had to imagine and pretend. Make it real…

Years later, I’m on the school run, smiling in the rear view mirror as my own eleven-year-old daughter scribbles down another page of her latest story in the back of the car. Nothing to do with homework or schoolwork, it is a morning ritual she just enjoys.

Moving on another decade, I am still spending my days, and often nights, writing and ghosting real life stories to earn my crust just as I’ve done since I was eighteen, when I became a trainee reporter on my local newspaper. Lucky to be paid for doing what I love? Very.

My daughter, now twenty-one, has just graduated with an English degree and the sole ambition to write for a living. In the genes? I guess so. Start working with Carole R today!
Get in touch