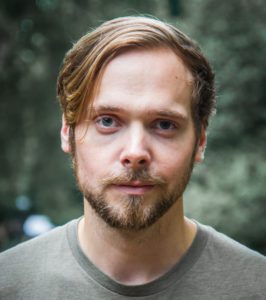 Ben is, unashamedly, an optimist. It’s a trait that’s served him well along the famously soul-crushing path of a freelance filmmaker, a career he pursues to satisfy his insatiable appetite for storytelling. It’s also helped him navigate a career as a writer. He’s at his best telling stories about real people and their own quests to make sense of the world, striving to share some of those slices of human truth that show us how rich and wonderful life can be.

As a Story Terrace writer, Ben interviews customers and turns their life stories into books. Get to know him better by reading his autobiographical anecdote below

My Grandpa was a Storyteller

My Grandpa was a storyteller.

He would only visit a few times a year. When he was here, before bed, instead of the usual picture books or a few chapters of Harry Potter, Grandpa would come up and tell me a story. I don’t know how he did it, if he put much thought into each one, but every night was a completely different, fully realised and seemingly off-the-cuff story.

Like any good long-running serial, he did have a format. It was always about a little boy, his menagerie of animal friends and an evil farmer. Oh, and a helicopter. Each time the farmer had cooked up some fiendish scheme to steal the boy’s pig.

You see, of all the animals the boy had in his entourage, the pig was the only one that had the potential to become ham sandwiches. The farmer even had a little taunting chant that he’d cackle every time he was close to achieving his ambitions – something along the lines of ‘come here little pig, I want your bacon’.

Only with the deft use of his unendingly diverse set of animals, and helicopter, would the boy be able to save the pig. I seem to remember one particularly high stakes scenario that involved dangling a crocodile out the side of the helicopter in some tense air-rescue sequence. Chk-chk-chk-chk-chk went the helicopter as it escorted the team to safety. In your face, evil farmer.

My Grandpa died last year, aged 90. I brought up the boy and the helicopter about 6 months before. It was the first time we’d spoken about it in about 15 years – teenagers do not like to remember how adorable their relationships with their elders used to be. We were both terribly frustrated that neither of us could remember the specifics of the farmer’s chant. I couldn’t say it at the time but I also felt frustrated that I couldn’t or didn’t know how to express how important those stories were to me and who I’ve become.

I didn’t quite put it all together until recently, but I am a storyteller too.

Start working with Ben P today!
Get in touch