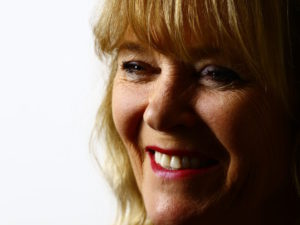 Andrea was educated abroad, as her father was a diplomat. After returning to England she studied history and theory of art, and later worked for David (now Lord) Puttnam as a film researcher while writing on Islamic art for Sotheby’s. After her two sons were born, she moved into journalism. She is now a freelance writer reporting to BBC Culture, the Financial Times, the Telegraph and other titles on subjects ranging from looting of antiquities by Islamic State to Japanese textiles. Her passions include piano and photography. She is a member of the International Association of Art Critics (AICA).

As a Story Terrace writer, Andrea interviews customers and turns their life stories into books. Get to know her better by reading her autobiographical anecdote below

Newfoundland, that vast province of Canada with thousands of miles of uninhabited mountains and pristine lakes, is both wild and strangely safe. Unlike tropical destinations, the only animals to be cautious about are the moose and, despite the vastness, there are no snakes or other poisonous species. But take a pair of teenage boys out there and they will find danger somewhere.

In 2006, I took my son Alex and his friend Nick, both 14, to a new resort on the shores of Deer Lake, near Gros Morne National Park. Our home for the next week was a magnificent chalet big enough for 12. Best of all, from the boys’ point of view, was a TV room all to themselves and a hot tub on the vast veranda.

It was August, yet despite this the lake was almost freezing. But the boys came up with a solution. After breakfast they would run down the slope from our chalet, dive in, swim very rapidly to a trampoline that stood in the centre, bounce furiously up and down, then tear back uphill and plunge straight into the hot tub just in time to survive the shock to their circulations.

For children brought up in the semi-suburban confines of Surrey, Canada’s vast landscape unleashed a spirit of adventure. They loved (almost) every minute of the holiday. Among the wilder sports they insisted on trying out was something called canyoning, where you get roped up to a hard-bitten mountain guide and plunge dangerously across slippery rocks and through icy waterfalls.

But for me, the strongest memory remains our kayak trip down the magnificent Humber River.

Nick, true to form, did not listen to a word of the instructor’s warnings about not rowing across the current, with the result that he turned turtle not once but twice. Now these kayaks, with their closed cockpits, seemed designed to drown people, and I for one was more than ready to quit – but we were in the middle of literally nowhere, and Nick bravely said he would go on.

So it was at this point our guide turned and said: “Ok guys. We’re just coming up to the rapids. All you have to do is paddle like hell and you will be fine.”

I will never, ever, get in a kayak again.

Start working with Andrea MW today!
Get in touch