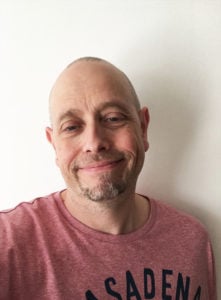 Tim is based in Maidstone, Kent, has been helping others write their stories for more than a decade, and has worked on a wide variety of topics. He studied with the Chartered Institute of Marketing and worked in the commercial sector before becoming a freelance editor and ghost writer for publishers based in the UK and USA. His work has covered a broad spectrum: from acting as a publishing consultant on celebrity autobiographies, ghosting autobiographies for other public figures, commissions for private individuals, to commercial tender writing for charities like Save the Children and business groups such as King Power. In his spare time, Tim is a jazz musician and has studied guitar with world renowned jazz guitarist Martin Taylor.

As a Story Terrace writer, Tim interviews customers and turns their life stories into books. Get to know him better: you can read an autobiographical story of his own below. Get in touch today to work with him!

They say you should never meet your heroes

They say you should never meet your heroes. It’s pretty obvious why. We build up an image of someone, based on the little we know of them, and we form an opinion. We construct our image from sound bites we hear, clips of them performing whatever they’re famous for, interviews and the like – all muddled up with our preconceptions of what we hope they are like in real life.

When I’m not writing, jazz guitar is my thing. Jazz isn’t for everyone – I get that. Indeed, my better half, who’s more of an early morning than late night person, has snoozed her way through the sets of some of the biggest names in jazz at iconic venues such as Ronnie Scotts. But I love it, perhaps because there is an element of structure to it, but then an element of complete improvisation – whatever seems right in the moment. In that way, it’s a lot like writing. Part craft, part inspiration.

At the top of most people’s lists of the greatest living jazz guitarists is Martin Taylor. His CV reads like a who’s who of jazz and popular music. He’s a phenomenal musician who has carved his own, unique path in the industry. So it was with a mixture of great excitement and huge trepidation that I found myself sharing the stage with him and Los Angeles based jazz violinist Nora Germain, in the unlikely setting of Shetland.

As a respite from relentless gigging, Martin now holds regular retreats for a small number of jazz guitar enthusiasts. Usually it’s a week of teaching, hanging out, late night jamming, and culminates in some kind of public performance. I’ll cut the suspense and let you know that Martin is one of the nicest, most gracious guys you’ll ever meet, with a dry sense of humour to boot. After a very early sound check on the day of our gig for the Shetland Arts International Guitar Festival, he quipped, “We’ve got enough time to get drunk and sober up again!” (Getting drunk is not Martin’s thing, by the way. He’s a committed Buddhist). So, here it was… after many years of bedroom noodling, trying to perfect my craft, I was about to get to play live, to an audience, with one of the masters of jazz guitar. I breathed a silent prayer that I wouldn’t fluff my notes. The lights came up, a brief introduction, plug in, and we began to play. Here we go….!