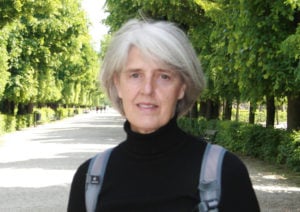 Writing has been a common thread throughout Shirley’s adult life. When she was a young mother of four she wrote multicultural children’s stories – three of which were published. Later, through her work as an environmental campaigner operating on a national and international stage, she wrote speeches, campaign documents, research papers, government reports and a newspaper column. Lately she’s been writing poetry and recreative fiction and recently took a Master’s in creative writing at Cambridge University, just for fun.

She’s passionate about the natural world – loves walking in it, swimming in it and when she’s feeling slightly less energetic, just looking at it. She also admits to having a long-standing love affair with the East, thanks to a father who spent the war in various parts of India, a lover who drove her from Lancashire to Pakistan on a bus, and a Hyderabadi husband.

As a Story Terrace writer, Shirley interviews customers and turns their life stories into books. Get to know her better: you can read an autobiographical story of her own below. Get in touch today to work with her!

In the yard at Lord Street juniors

Patsy Wilcox always brought fruit to eat at break. Overripe, black bananas were her favourite. She said she preferred them that way but I liked them when they were yellow. Once or twice a week she’d bring in an apple and a few of us would gather to watch her eat the core. She said it was the best bit. Sometimes she even ate the stalk.

One day she brought in half a pomegranate, which drew quite a crowd. I’d never seen one before. It was a surprising thing, a kind of leather purse packed with rubies, like the ones in my Buccaneer game. She took a needle from her pocket and ceremonially picked out the seeds. Each one bled a little when she pricked it. She said the juice tasted sweet.

I told mum about Patsy’s pomegranate performance. She said she would buy one so that I could taste it for myself. There weren’t any in the local shops so we had to get a bus to town to get one. When we got home I put it on the breadboard, got the big knife out of the drawer and was just about to cut it in half when mum said “Not through its heart – no need to bleed it.”

She took the knife off me, slit the skin in four quarters and broke into the fruit with her hands. I helped her pick out the seeds and we sprinkled them over the ham salad we were having for tea. They were crunchy and tangy and much tastier mixed with other things than on their own.

When I saw Patsy the next day in the yard, I told her that I’d eaten pomegranate seeds and that they tasted a bit sour on their own – but she didn’t seem interested. She was too busy looking at the matchbox full of ladybirds that Eileen had brought in to show her.

Eilleen was always ‘doing things’ for Patsy. I saw her peeling Patsy’s orange one day. She had juice all over her hands. If Patsy wanted a message delivered, Eileen would be the one to deliver it. Eileen told me that Patsy thought I didn’t like her.

A week or so later I was in the Co-op doing an errand for mum. All the staff were talking about the massive spider Stan had found in the banana crate. I asked him if I could take it to school to find out if it was poisonous. Mr Melling, our deputy-head, knew a lot about creatures. I was sure he’d know. I expected Stan to say no, but he didn’t.

He took me to round the back to the store-room. The spider was at the bottom of the crate, still trying to escape. We knew she was female because a silk pouch full of her dead babies had been found in the same crate. Stan flicked her into an empty pickle jar with a stick, screwed the lid on tight and handed her over to me. I think he just wanted rid.

I took her home and mum seemed wary. She punched some holes in the lid and said that I could only take the jar to school if I promised to take it straight to Mr Melling. She was worried the spider might be poisonous. I promised I would – but actually, I didn’t.

I took her straight to show Patsy, hoping she’d be impressed. She took the jar in both hands, examined the spider from every angle and, without even looking at me, she raised it above her head and shouted “Look what I’ve got.”

Eileen was first on the scene. When she got close, Patsy put the jar right up to her face. She went mental and that set all the other kids off. They were yelling and pushing and screaming. Patsy just stood in the middle of it all laughing! Then Mr Melling came out. When he saw the spider he looked shocked. He asked lots of questions and I had to explain about the banana crate.

He said she was a tarantula and that her bite made people dance around until they died. He confiscated the jar and said that I had had a lucky escape.