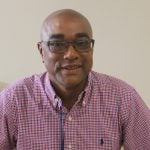 Ron is loving life in England again after eight years working in the Caribbean – despite London’s notorious chilly and changeable weather. He was a sports editor in the Cayman Islands but the lure of big city life again was irresistible, plus he is building awareness of his fitness workout Maxathon. A best-selling author and novelist, Ron’s now a sub-editor on national newspapers, writing assignments and ghostwriting memoirs.

As a Story Terrace writer, Ron provides professional ghostwriting services to capture customers’ life stories through carefully crafted anecdotes. Below is an anecdote of his own. Get in touch today to work with him!

Meeting ‘Lights Out’ Illuminated My Career

It was my dream assignment; recording a TV feature on the legendary Kronk Boxing Gym in Detroit. It was 1989 and as an assistant producer with Trans World Sport, the global weekly sports TV programme which is still broadcast today, this was the shoot top of my wish list.

The Kronk had produced the most world champions of any gym on the planet thanks to their brilliant trainer Emmanuel Steward. Having grown up adoring Muhammad Ali and been an enthusiastic but pretty poor amateur boxer for a couple of years, filming at the Kronk was the fantasy location shoot.

The night before shooting, we went to a boxing show in Ann Arbor, on the outskirts of Detroit. Vox popping the fans going into the venue, one woman said that she was there to watch her son, James Toney, fight and insisted he would one day be a world champion. He outpointed his opponent but was not sensational. Nevertheless, there was something about the novice fighter that impressed in the chat afterwards. We arranged an interview in the Kronk the next day although Toney trained elsewhere.

The gym was in the basement of a community centre and sweltering hot. Sauna-like in fact because the building’s heating pipes ran along the ceiling. It suited the boxers helping to keep their weights low for championship bouts. Through steamed up lenses we shot the fighters sparring and working out. Toney’s manager Jackie Kallen claimed he would one day be heralded as an all-time great.

After the shoot, Toney took us to the kitchen of his mother’s bakery and hammed it up in chef’s gear pretending to bake cakes. He was adamant of his destiny of becoming a superstar.

Won over by Toney’s charisma and thorough knowledge of what it takes to be a champ, on returning to London I had enough footage to do a separate feature on him besides the Kronk one. But my bosses said no. Editors of boxing magazines were not interested on a feature on the fighter nicknamed ‘Lights Out’ and none of my boxing mates wanted to know much about him.

Nunn was knocked out in the 11th round by Toney who went on to become a modern great.

Kallen too reached the heights. Her journey as a female boxing manager who overcame the chauvinist attitudes in the sport was the inspiration for a Hollywood film, Against the Ropes played by Meg Ryan. 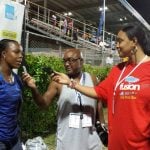