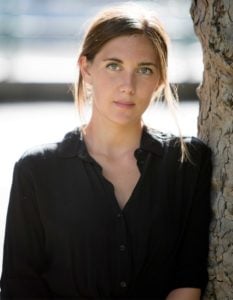 Olivia was born and raised in London, where she has always lived except when attending university (reading English at Cambridge) and brief residencies in Brussels and New York. She has been writing full-time since 2014. Since then she has published a novel (2017) and a personal essay collection (2018), several short stories, and written for publications including The New York Times, Guardian, Financial Times, Vogue, and The Sunday Times.

She often writes about art, books, culture, travel, love, technology, and mental health. She is about to start a PhD in Creative Non-Fiction at King’s College London, where she has also been a visiting lecturer. Her next two books (a second novel and another personal essay collection) are forthcoming from Bloomsbury. The latter involved interviewing and researching her own family history, which led her to Story Terrace. Her surname is from what was formerly Yugoslavia, where her father’s family come from. It’s pronounced -itch, like Djokovic.

Interests include walking, cooking, films, and wire-haired dachshunds. She is also interested in how our personal stories intersect with the historical, the political, and the social, and in leaving traces for future generations to follow. She is currently tracing the lives of three grandmothers – one from Manchester to New York via WW2 evacuation and a cargo ship to Tonga, another to the UK from Belgrade between the wars. She believes that in times of change and uncertainty it is more important than ever to have our stories written down in a book.

As a Story Terrace writer, Olivia interviews customers and turns their life stories into books. Get to know her better by reading her autobiographical anecdote below.

My centre of gravity in London is a triangle, with Kings Cross to the north, the British Museum to the south and the Barbican to the east. At its heart is Clerkenwell. It vibrates at a certain frequency – thanks to its layers of history – that I find healing. In the 1100s it was a rural area just outside the walled city. Named after a spring where clerks came to watch religious plays. Later home to Wat Tyler’s rebellion, John Wilkes, Italians, slums, Dickens’ Fagin. The way it all slots together is soothing, the way a well-organised cupboard is. I went to school in the Barbican. Mythologised the briefly endangered Fabric nightclub. I spent university summers interning on an alley near St. Peter’s, the Italian church, and visiting the neighbouring deli where I used to read, drink coffee and eat ravioli on lunch breaks, not realising that no one else took one.

Toward the bottom of my triangle runs the Clerkenwell Road. It’s the road that feels closest to my own heartbeat, its offshoots and intersections like an EKG. My grandparents live above Leather Lane, which joins at its western end. I always seem to stay there during upheaval. Between jobs, between homes, between relationships. Liminal periods largely spent in solitude. During summers, when my grandparents go away, which are traditionally a time of spiritual renewal because my years still begin in September. It’s my ring-the-changes road. It started when I stayed by chance during the 2011 riots. Then I stayed by choice, after an operation as the 2012 Olympics got underway, when the sound of television crowds followed me down the street like a wave, the physical feats strengthening me, in mind if not in body.

2016. Summer. For a month, newly single, I am there waiting to move into my first flat, to live alone for the first time. One day I go to the Ragnar Kjartansson exhibition at the Barbican with a friend who is moving to New York and after we say goodbye I walk home, blinking away tears. I’ve just finished editing my book and can no longer read it on screen so have it printed and bound at the Wyvern Bindery, an attractive green shop at the eastern end of Clerkenwell Road.

I red-pen my newly physical book, sitting on a bench in St. John’s Cloister Garden, halfway along. My back in the shade of a two-hundred-year old olive tree, my bare feet scorched on stone above the bodies of Christians awaiting the resurrection. Tiny and peaceful, it’s been here since 1144 and belongs to the Order of St John, who first built a hospital in Jerusalem to care for pilgrims and nowadays run the St. John’s Ambulance service. It’s still planted with medicinal herbs. On the opposite side is St. John’s Gate. Shakespeare travelled here to license his plays, after that came Dr Johnson. I pass the former petrol station that is being transformed into a hotel. For a summer in 2010 it housed an outdoor cinema with a space-age silver curtain, built by friends from university. I watched ‘Barbarella’ there.

I loop Clerkenwell Green, home to Marx’s Memorial Library, buying a coke in The Three Kings by St. James’ church with the duck-egg ceiling. The Old Sessions House, a Masonic Lodge for a while, is becoming another members club. The road arcs over the sinewy tracks of Farringdon Station, the terminus of the world’s first underground railway. On the left, St Paul’s dome is glowing. Outside St. Peter’s there is a funeral hearse and a black swarm of cheerful Italian mourners spilling onto the road. On Leather Lane the street-food vans are packing up and an old woman is foraging for good tomatoes left behind. I buy iced coffee, text the boy who suggested a date. I pass the flower shop, the famous magic shop where they don’t like browsers, the bike shop, the shop with midcentury furniture I can’t afford. I turn back at the Peabody Estate. Laugh inwardly, as I always do, at the name ‘Clerkenwell Screws’, which sells exclusively screws, nuts and bolts.

He texts back. We will find a bench outside The Eagle, first “gastro pub”, on Farringdon road, which meets Clerkenwell Road right in the middle. I will walk along it to meet him and call my newly absent friend to “practice speaking” on the way, leaving her an answering machine message that is just a peal of laughter.

Get in touch today to work with Olivia!