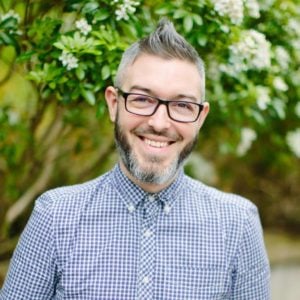 Lee hails from Derry, a stunning medieval city in Northern Ireland. Having edited the arts website CultureNorthernIreland.org for almost a decade, Lee now operates as a full-time freelancer, writing features for the Sunday Times and the Belfast Telegraph, along with a monthly column for Northern Women Magazine. (The disguise worked a treat!) His passion for Radiohead is only equalled by his obsession with history. He spends his evenings gorging on Netflix with his wife and his weekends swinging on swings with his son.

As a Story Terrace writer, Lee provides professional ghostwriting services to capture customers’ life stories through carefully crafted anecdotes. Below is an anecdote of his own. Get in touch today to work with him!

We travelled down in relative silence, exchanging meditation for our usual patter. Not daunted but far from easy, each ruminating on the man, the weight of his works, his place in the canon, we approached Dublin from the North.

‘What do you think he’ll be wearing?’

Well, God only knows. How should I know? What does a Nobel Laureate wear on a Wednesday morning at home in his beachside Sandymount abode? The thought of Heaney in slippers flashed through my mind, and something similar hers, and we each erupted as we often do, in unison. (I think, at that point, that I lit a cigarette. The nerves beginning to kick in.)

Between my finger and thumb
The squat pen rests; snug as a gun.

I worried about her camera, if I’m honest. It was an old Nikon F, a 1960s model that I could never, for the life of me, use to photograph anything in focus, living or dead.

‘Keep still,’ she would instruct. ‘Press the button. You have to keep dead fecking still.’

It took a tripod, which she didn’t have, and, of course, an eye, which she did. Every time, tainted with my desultory attempts, her portraits and candid shots would emerge breathtaking, and this without any kind of additional stabilisation or fancy DSLR monitor function. Beyond me altogether.

I needn’t have worried at all. In the event, despite the weight of the occasion, the sweaty palms, taking direction from the man himself as he sat in an armchair, books in the background, and pulled the kind of pose (solemn, timeless, dressed in a black suit) that only history’s greatest have the right to pull, she took the shot of her life. It will outlive us both. Rightly so.

Several years later that black and white photograph hangs in our hallway, outside the bedroom of our son, christened after him in honour – Patrick Seamus Henry – sharing a frame with a handwritten note of appreciation sent from his wife, Marie. ‘On Seamus’ behalf and on my own, thank you for the excellent photo which you sent us.’

I catch her reading it on occasion, admiring her work, when she’s down, fraught, in need of solace. I read it too, attempt to come to terms with that day, and am continually astonished – with its quality, with the stateliness of his features, with the fact that it even happened at all…

The steam from the impossibly tall chimney at Poolbeg Generating Station disappeared almost as soon as it became visible in the chill spring air, and we swung onto Sandymount Strand with the sun in our eyes.We parked and walked the fifty or so yards along the pavement until we came to our destination, like children to a museum of wonders, and shared a moment of stillness. Looking.

Then we entered through the gate, and I remember knocking the big front door, and it opening, and it being him who opened it – his hair white as winter cotton, his smile wide and welcoming – and the rest went by as if in a dream.