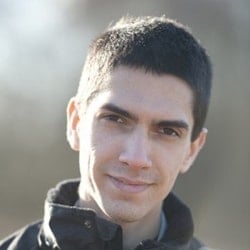 Krishan Coupland is a graduate from the University of East Anglia MA Creative Writing programme. His writing has appeared in Ambit, Aesthetica, Litro and Fractured West. He won the Manchester Fiction Prize in 2011, and the Bare Fiction Prize in 2016. He has an ever-changing range of interests, which encompasses everything from Cold War civil defence publications to theme parks and game design. He enjoys travel, and has spent time in Southampton, Norwich, London, Edinburgh, Prague and Tokyo.

As a Story Terrace writer, Krishan provides professional ghostwriting services to capture customers’ life stories through carefully crafted anecdotes. Below is an anecdote of his own. Get in touch today to work with him!

The First Building I Fell In Love With

The first building I really fell in love with was a derelict Ministry Of Defence installation atop the cliffs that loomed over the town where I spent my childhood. It was visible from the river, standing clear of the white face of the chalk like an upraised finger, glowing with mystery. Rumours about it abounded: that there were secret tunnels underneath the base, built for a war that never really came. Bunkers big enough to accommodate a thousand. An underground city. Vast libraries of confidential documents detailing everything from troop movements to the Prime Minister’s meal plan. Confidential darkrooms. Perhaps even a secret prison.

It was an hour’s walk uphill from the train station, along roads without pavements, across a motorway bridge, over ploughed and rock-rutted fields. All this just to stand outside the iron gates and stare; the whole thing was surrounded by a chain-link fence lined with curls of rusting razorwire. A man with an oversize yellow jacket and a bored-looking dog patrolled the grounds once a day. To me – age seventeen, stick-skinny, antisocial, repeating a year of college – the base was an improbable obsession, but one that wouldn’t shift.

Reading about it only fired my curiosity. The place, it seemed, was a self-contained city, complete with dormitories, food halls, labs, barracks, rec rooms and more. All of it left behind, abandoned. All of it impossibly enticing. It would be six months before I would see the inside of the place, by which time I would have met Daniel, and – once again – everything would have changed. 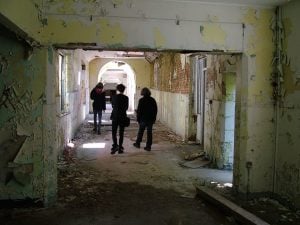