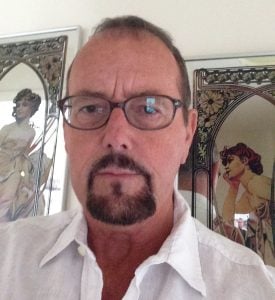 John McDonald was born in Southern Ireland in 1948, and educated at St. Mary’s Academy and later at London South Bank University. He has been a professional writer for twenty years.

He has written six novels and ghosted eight memoirs with the likes of Penguin and Simon & Schuster. He also recently adapted Shakespeare to graphic novel format with Classical Comics. He is currently working with Random House and Gatecrasher Books, as well as Story Terrace. His work has been widely reviewed in the press; reviews and samples of his work can be viewed on his website:https://www.johnfmcdonald.co.uk

As a Story Terrace writer, John interviews customers and turns their life stories into books. Get to know him better: you can read an autobiographical story of his own below. Get in touch today to work with him!

The first and last time I ever saw a wild panther was during the filming of Traveller, down in Dorset. The location was a remote horse farm, with fields and woodland all around. At the end of a day’s filming, we’d sit round a campfire and eat and drink and tell stories in the firelight. One of those stories concerned a large wildcat that was said to inhabit the area. I was sceptical, so one of the locals invited me to go looking for the animal.

Later that night, we went out, moving quietly through some fields of maize towards a wood called The Withybeds, because it was full of withy trees. There had been a lot of rain of late, so the maize was too wet to be harvested. We moved forward quietly, into the woods, where pheasants were roosting. After wandering about in the trees for about an hour, it looked like the panther, if there was a panther, had been scared off by the commotion I was making. So we decided to call it a night and head back.

I followed close behind my guide and we came out of the woods and back into the fields of maize. Suddenly, there was a strange sound – growling – guttural. It was most unusual, not like anything I’d ever heard before. My guide crouched and signalled for me to do the same. I whispered to him.

My guide started to squeak the animal in, making a sound like a dying rabbit. We waited. Something was moving towards us, through the uncut maize. My guide squeaked it closer. And closer. When it was almost upon us, he shone his torch into its eyes – eyes that were big and round, shining back. It wasn’t a fox, it was a black panther, as big as an Alsatian dog. It frightened the wits out of me and I took out to run. After some distance, I looked over my shoulder, but the panther wasn’t following. I stopped and waited for my guide, who came after me, laughing.

“It must’ve got just as big a fright as you. Fancy coming through a field of maize, thinking you’re going to find an injured rabbit… instead you find a city slicker who jumps up shouting and waving his arms.”

There were several other sightings of the big black panther in the area after that, and scratches on a fowl-house door that looked like they were made with six-inch nails.

After the maize got cut, the panther disappeared and was never seen again. 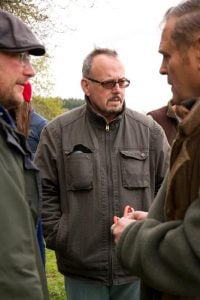