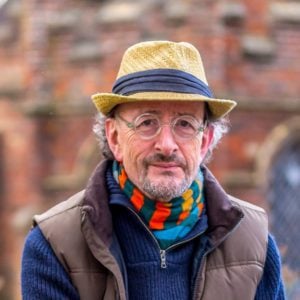 Only an avid listener could write a guide to birdsong! John is an established author whose titles range from nature, photography and art to true crime, and he has written about his experiences as a cancer survivor.

John’s life in books includes not only writing, but editing, printing, publishing and bookselling. After training at London College of Printing, he honed his skills at the Victoria & Albert Museum. He also happens to be a member of every public library in England!

When not walking or running in the Shropshire countryside, John works as a freelance writer and copy editor.

Sunday in the Park with Dad

“About time too! We were beginning to wonder where you’d got to!”

It was a Sunday like any other Sunday, church in the morning, slap-up lunch, and the obligatory afternoon walk. Our best walks were in the Chantries, where Dad always managed to surprise us with a “sweet tree”, a sapling he’d decorate unseen with toffees in their wrappers, glittering like baubles. No baubles today though. Today we headed for Stoke Park, whose dreary playing fields rolled emptily to the horizon.

But this was more interesting! Our path took us near the top of a steep embankment. If I lagged behind a little, nobody would notice I had made the very edge of the drop a tightrope in my mind, to traverse with arms extended. Until… whoa! I lost my footing, slithered down the slope and came to rest caked in mud.

“It doesn’t matter”, I pleaded. “It’s only a bit of mud”. I must have sounded like Just William.

But it did matter. This was exactly the sort of thing that drove Dad up the wall. I can remember now the way he used to stretch out the word “infuuu…riating”. He had fought in the war, in India and Burma, had endured God knows what, was our hero. And we three kids were his little army, those Sunday walks our parade ground.

There was a council of war between Mum and Dad, in lowered voices. Talking behind our backs and in front of our faces, at the same time. That’s grown-ups for you.

The upshot was that Mum took me home. To let me know I was in bad books she said nothing, and I knew better than to run a stick along the usually irresistible Nightingale Road railings. Secretly, I thought I’d come out of it rather well. Instead of that boring walk I could spend the afternoon reading comics in front of the fire!

What was this though? Mum was handing me another outfit of Sunday best clothes. What did I need these for?

Back? To the park? Was there something they hadn’t told me? That the Queen was paying a State Visit to the paddling pool, perhaps?

We walked – trudged, in my case – back to the exact spot where we’d left my Dad, my brother and sister, and there they still were. Nothing, but nothing, was going to stand between our little family fighting unit and the pack-drill of the Sunday Walk. So on we went.