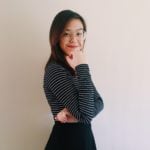 Having moved to London from the Philippines to pursue a BA in Creative Writing, Iris is a writer who mainlines poetry, screenplays and short stories. Her works are often inspired by religion, mythology, water, and films. Consistently published and shortlisted in various zines and anthologies since 2010, Iris spends the majority of her time wrestling with her muses and participating at local literary events. Snacking is also a favourite pastime. Iris is currently finishing up her Masters in Creative Writing at Brunel University, and aims to begin her PhD soon afterwards.

As a Story Terrace writer, Iris interviews customers and turns their life stories into books. Get to know her better by reading her autobiographical anecdote below.

Like the beginning of many a movie, there was a thunderstorm the night that Max arrived. Outside was a downpour of rain, bulleting against the roof. It was late and I was probably up past my bedtime, but nobody had put me to bed yet. Or at least, not that I remember. I was five, maybe six, and I wasn’t one of those kids who asked a lot of questions. The entire house was awake and expecting. I didn’t know for who, or what, but I found myself waiting too.

Finally, headlight beams flashed through the front windows as a car pulled up outside. There was the sound of an engine killed. A car door slammed shut. The heavy, metal rattle of our gate as someone let themselves in. My parents and sister were talking, but I didn’t understand what about. One of them opened the front door. I watched my uncle step into the house, absolutely soaked. He was breathless and excited. In his arms, a drenched puppy, who looked just as confused as I felt. The door was closed behind them, and my uncle immediately bent down to put the puppy on the floor. At a crack of thunder, the puppy went from shivering by his feet to hiding under the table in seconds, terrified.

I slid off the couch and got on the floor. The marble was cold against my hands and knees as I peered under the table to get a better look at it. The puppy stared back at me, brown fur matted dark against its skin. Dark eyes wide. Paws tucked under itself to huddle as small as it can. The puppy and I stared at each other as my uncle explained how he found it. How he couldn’t leave it in this storm.

I didn’t know it yet, but the puppy would be ours to keep. That we’d name him Max—short for Maximus Decimus Meridius, because my family loves cinema—and that I’d grow up watching him grow old. I didn’t know that there’d be many more moments when Max and I would lie on the floor and stare at each other in silence. That I’d learn how to be brave about thunder to help him feel less afraid. That after more than a decade, he’d leave us on a lovely sunny day, and I’d still think about him sometimes years afterwards. 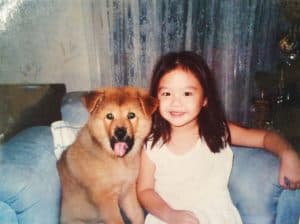 Get in touch today to work with Iris!