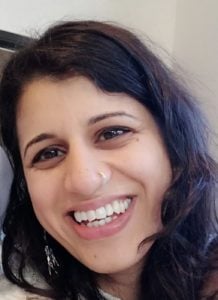 Gouri has 15 years’ experience in the international media industry, working across TV, print and radio. She spent five years working on the production desk for Al Jazeera’s weekly media review, The Listening Post, tracking and reporting on media stories from across the globe, including China, Thailand and Bangladesh. A keen traveller, Gouri has spent the last years exploring – going from Madagascar to Myanmar to to the hills of Medellin in Colombia. Workwise, she has also spent time in Malawi and often reports from India, where she has written on culture and the rise of the hip-hop scene. Currently based in Berlin, Gouri has been covering culture, current affairs, migration and race for international sites like Al Jazeera English, Deutsche Welle and Middle East Eye. Gouri loves reading, has recently discovered a passion for cooking and is currently learning German and her mother-tongue Punjabi.

As a Story Terrace writer, Gouri interviews customers and turns their life stories into books. Get to know her better: you can read an autobiographical story of her own below. Get in touch today to work with her!

Legacies of the Indian Partition: A family history

Today, I’ll be joining millions of Indians around the world to mark 71 years since India’s independence from the British. For me, it won’t be a day of celebration, but rather a remembrance of one of the darkest moments in the history of the subcontinent, when millions lost their lives, homes and their sense of self and community, members of my family included. It was an event that turned friends into foes, everyday people into refugees and created divisions along religious lines that were cut so deep, the effects are still being felt today.

In the years that have followed, a vast amount of literature – books, plays, poems and academic studies – have been written on the historical and political significance of the Partition. Yet there is one area of study that’s so far been neglected. According to two prominent Indian psychiatrists, Alok Sarin and Sanjeev Jain, there has been little discussion in medical circles around the impact the Partition had on mental health. In an effort to start this difficult conversation, they have brought together experts across various fields for an anthology on the topic.

Having recently finished the book, I will remember my ancestors today with a better understanding of the trauma they lived through. As refugees who fled Lahore to Delhi, they lost their land, their home and their livelihoods. It was hard for the family to rebuild, but somehow they did, and today their many grandchildren are where we are – writing this piece, going to work in London, raising a young family and so on.

The book led to me to explore the extent to which unhealed traumas of our ancestors can be passed down through the generations, yet reading it wasn’t a wholly sombre experience. In fact, I finished it feeling more positive.