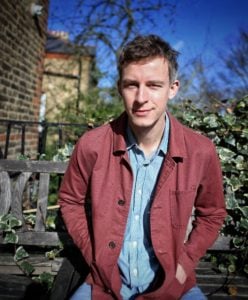 Francis used to be found roaming Southeast Asia, where he lived and worked as a journalist for six years, writing for The Guardian, TIME and others. He published his first book in 2017, on the genocide of Rohingya Muslims in Myanmar, and now lives back in London where he continues to write. He has a deep love of the craft of storytelling, and uses journalism as an excuse to sit for hours and talk with people about the worlds they inhabit.

As a Story Terrace writer, Francis interviews customers and turns their life stories into books. Get to know him better: you can read an autobiographical story of his own below. Get in touch today to work with him!

As a child there were two older men in my life, one alive and very present—my father—and one long deceased but forever chattering away in the background of our family home. My father is a scholar of Charles Dickens, and the great novelist and his many colourful characters peopled my childhood world as much as any author that I read myself. At dinner, Dad would relay anecdotes from Dickens’ life whenever a space opened in the conversation that could accommodate them, and every year before Christmas the family would drive to Gad’s Hill Place in north Kent, where Dickens lived until his death, for what, to us, was an annual Christmas event as normal as any other. In the old hall of the grand house, Dad would don tails, ascend the steps to the stage, and in front of an audience read from A Christmas Carol, his voice filling the room as he brilliantly shifted from the mean, nasal growl of Scrooge to the vulnerable, high-pitched pleading of Tiny Tim.

Both my mother and father are avid readers, keenly interested in how characters and narratives develop, and in what fiction can tell us about the world we live in. Dickens, the
great social commentator of his time, was skilled at conveying the particular languages of his characters, who through his writing could natter, bicker and holler with complete abandon in their own individual tongues. He roamed London day and night, moving between the wealthy neighbourhoods of the centre and the Victorian slums of the east end, picking up on words and turns of phrase in one community that would be utterly foreign to those living a mile down the road and working them into his prose.

Perhaps from this my father took an interest in how the meaning of the slang we as children used had evolved from his day—how “wicked”, “bad” and other negatives were co-opted by teenagers of the 1990s and turned into positives.

But he wasn’t au fait with every shift in vocabulary, and when I was three, we added a new member to the family: a cat. Besotted with He-Man, my brothers and I named her Battle Cat. But it was one syllable too many, and soon she became Batty.

By our early teens, we knew not to tell people the cat’s name. The meaning had changed, and still highly susceptible to embarrassment, we knew it would trigger mockery from friends. But Dad wasn’t so aware, and it became the family password. If I wanted to order something over the phone that required a password be given, I’d have to clench my jaw and tell them.

There was a usual sequence: a pause, a “Can you repeat that please?”, another pause, and then stifled hysterics. In time we came to laugh about it, and Dad, having finally caught up, eventually assured us it had been changed.

Years passed, I moved out of home, and I never again needed to use the password. Dad retired, but didn’t retire his passions, and he continued to give readings and to live a good part of his life inside Dickens’ imagination.

And then one family dinner years after we’d put the story of the password to rest, it came up again. We had a chuckle, but then Dad paused. It had been happening again, he said. As before, he’d been giving the operator a password—a new one—and again they would go quiet, laugh bemusedly, go quiet again, ask for it to be repeated, and then hold the receiver at arm’s length as the hysterics began. Why, we asked? What was the password? It was just a Dickens character, he told us. But what character? Well, it was from Martin Chuzzlewit. What character?! You wouldn’t know because none of you have read it. WHAT…CHARACTER?