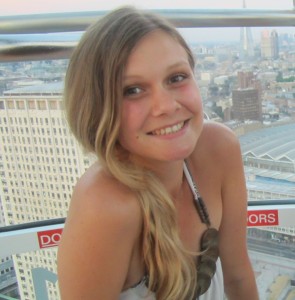 Emily recently returned to the UK to study for an MA in Writing at Warwick University, after having spent the last two years living, teaching and sweating in Saigon, Vietnam. She balances out her love of all things sedentary by setting herself outlandish physical challenges. This year she ran the Amsterdam Marathon (she at least picked a flat one), trekked in Japan and Nepal and climbed Mount Fansipan – the tallest mountain in Indochina – in her pyjamas. Her superpower is the ability to complete cryptic crosswords.

As a Story Terrace writer, Emily interviews customers and turns their life stories into books. Get to know her better: you can read an autobiographical story of her own below. Get in touch today to work with her!

“It’s time to admit we’re lost. We need to check a map.” It was Swiss that said it at last.

The Kumano Kodo trail was – according to its website – tranquil, meditative; a stroll through sun-dappled bamboo forests, past trickling streams and ancient shrines. But after two days of an uphill slog, stumbling over tree roots and panting for breath, we’d been glad of the last hour downhill. Even if it was a main road, and clearly the wrong way.

“Definitely not. You don’t need maps on a trail. You follow the TRAIL! You guys use your map, we’ll use our initiative.”

We’d met Swiss and Kiwi along the route. Their light packs were brimming with survival essentials: bug spray, first aid kits, bear whistles. Mine and Emma’s contained a bottle of water and a few onigiri, plus everything else for our two week Japan trip. Swiss and Kiwi found this highly amusing. We were bad planners, but now felt stubbornly compelled to defend our haphazard approach.

We peered ahead, to where the sides of the road sloped steeply into dense bamboo forest. The road itself twisted and turned, obscuring the route. Kiwi and Swiss examined their map.

“Well it’s forwards or backwards,” I declared, “and if we go backwards we’ll miss our bus home.” Emma and I pressed quickly on down the hill, feigning confidence.

“What kind of logic is that?” Swiss was impatient, calling after us. “The map says we’ve gone the wrong way. We need to head back. It’ll only be an hour or two, and we’ll be back on track!”

“We don’t have an hour to spare!” I called back over my shoulder, too stubborn to go back.

“Come on, you’re being ridiculous! We’ll have to leave you!”

We marched on. I have no plan, I thought. Maybe Emma thinks I do. We’re doomed. Suddenly, footsteps were pounding on the road behind us again.

“Wait! We can’t leave you to get lost on your own. We’ll have to come with you and hope that a car comes past.”

It was maybe five minutes later that the road curved enough to reveal the great, red torii gate looming in the distance. The end of the trail.

Emma and I high-fived. Utter luck. Sheer chance. Swiss frowned and pulled out his map. 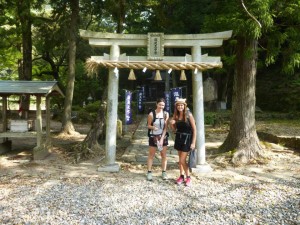