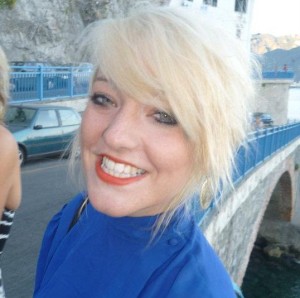 Eloise is a freelance writer, researcher and editor. She holds an MA in Creative and Life Writing from Goldsmiths, University of London. In 2013, she was the recipient of Plymouth University’s Creative Writing Award for her work of literary non-fiction. She loves to travel and on separate trips has travelled solo around the world, surfed in Indonesia, backpacked in Central America, and ridden a motorbike around much of Europe. Her work has been published in national magazines and journals.

As a Story Terrace writer, Eloise interviews customers and turns their life stories into books. Get to know her better: you can read an autobiographical story of her own below. Get in touch today to work with her!

Caught in a Rip

“Paddle!” Tom waves both arms over his head as he sits, bobbing on his board some three meters away. “Paddle across!”

Yet, for every paddle forwards, I am dragged two feet back.

Ever since I was a little girl, I had wanted to surf. Temporarily, you become a part of the ocean. It rids you of all your negative energy and has a way of grounding human beings. Surfers encourage each other. We congratulate each other for good rides. We become a community, riding the earth’s energy in its raw and natural form.

Since dawn, Tom and I had been catching perfectly formed four-foot waves, fanned by an offshore wind, but they had dropped off and we decided to search for surf another five miles up the Cornish coast. By the time we arrived, it was late afternoon and the beach, though small, was almost deserted. A young couple had wandered past with their chins tucked into their scarfs. We walked past a toddler and his dad building a replica of St Michael’s Mount out of sand. There were still sets coming in, but no other surfers out.

I’d seen the rip, the dark gap of fast moving water between breaking waves and the whitewater, and had planned on using the channel to help me paddle out back. Only, it had sucked me out towards a cluster of rocks faster than I could paddle.

“Don’t panic, you mustn’t panic,” I tell myself, but my chest tightens and my forearms, already tired from the mornings surf, are feeble. I know what I am facing. Rips take more than a hundred lives a year.

“Paddle harder!” At six-foot-two, Tom is a foot taller than me, and his arms are stronger. It’s in moments like this when the ocean humbles you. It changes your perspective of yourself and the world around you.

The man, who’d been playing with his young son, wades out fully clothed until his hips are submerged. He fans his hands out in front of him as he struggles to stop the current dragging him further in. “Keep going,” he calls, holding his arm out and pointing to the side. “Paddle across.” He’s just a few meters away by this point, but his voice carries into the wind.

I stay low and centered on my board and plunge my hands into the water. With long strokes, I start to paddle across the rip current, parallel to the beach. Fifteen minutes later, through salty tears and windswept wet hair, I see him smile as I slip, exhausted, off my board and stand with my head above water. He nods once to me before turning back towards his son.

That day I learnt a life lesson. Too often we try to face an obstacle head on. More often than not, lateral thinking is all you need. 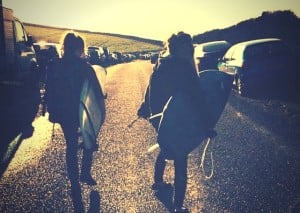