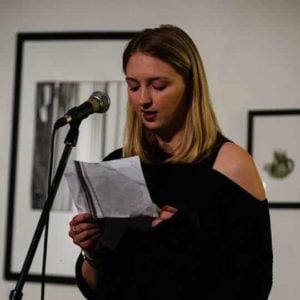 Dizz Tate is a writer currently living in London, after growing up in Orlando, Florida. She has been previously published in the Wrong Quarterly, Squawk Back, Arachne Press, and Femmeuary. She has written a short play as part of the London Design Festival, and took part in the Young Writers Workshop at the Lyric Theatre in Hammersmith in 2014. In 2017, she has been featured in 3:am magazine, No Tokens Journal, and Corda. She is currently working on her first novel Stillness which deals with grief, loss and spiritualism in a small Florida town. She is represented by Harriet Moore at David Highams Associates.

As a Story Terrace writer, Dizz interviews customers and turns their life stories into books. Get to know her better: you can read an autobiographical story of her own below. Get in touch today to work with her!

I grew up in a town where the rollercoasters were high, the accents chunky, and the grass spray-painted greener. My school was huddled in the shadow of Universal Studios, and from my algebra class window we could hear the tourists scream as the Hulk rollercoaster spit them out into a loop-de-loop and drop.

As a four-foot-high kid, I was somewhat enamoured by these roaring machines. I was shy, with a whispery voice that irritated everyone, and a tendency to take to the corners. I appreciated being strapped in to a colossus, flung into a hot blue Florida sky, with the chance to release an ear-rattling scream lost in a chorus of others. My father liked to sneak me in to the theme park on a Sunday morning, using some out-of-date back lot passes. We’d stride our way through a parking lot of forgotten and broken carriages, the Halloween and Christmas floats disintegrating from the summer’s storms. There was a hole in the wall that led to Dr. Seuss world, and we’d slip from the grey lot into a world of mad multicolour, a Cat in the Hat sticking out a fat white glove for us to shake.

It was one of these fall mornings, striding along in my dad’s wake toward the Hulk, that all the courage I had so carefully cultivated suddenly walked away from me. I pretended not to notice it swagger off into the queue. I was nine years old. I was determined to impress my dad. We wound our way through the empty queue, dipping under the ropes. It was off-season. A cartoon Hulk on the televisions above politely asked us not to shove or push even if we started to feel “AN-AN-ANGRY.”

We were the only ones. The teenager on duty, his hair split in two greasy curtains, a dragon amulet proudly and illegally on display over his purple and green polo shirt, did not inspire confidence. I fell silent, but this was normal for my dad and I. We had one of those friendships where we could weave quite contentedly between quiet and chat.

I was strapped in before I could say, “I’m scared,” and the sound was lost as the great machine woke up and started to tick-tick-tick us up the long escalator. Lights flashed around us. The Hulk started to huff.

We were thrown out onto the air, reaching the first drop, when things started to go wrong. We slowed down. We were perched on top of the first loop-de-loop, staring down across the park. I looked toward the nets hung beneath to catch any mobile phones, sunglasses, teddy bears that have not been held onto firmly enough. They empty the nets a few times a year and have a big sale for the theme park staff. That’s how I got an iPhone for one birthday.

We were stuck for what seemed like hours. My dad managed to twist his hand from his own brace to sort of swat at my own in the most comfort he could manage. My heart followed it’s own high-speed looping ride, and I flicked between closing my eyes and opening them, the world stretched out beneath us, from the vast expanse of perfectly manicured theme park to the highway. The edges seemed to glitter in a way that could have been the ocean, but it could have just been the sun in my eyes.

We were slowly drawn back into the tunnel. The teenage boy had panic in his eyes. We staggered off with free passes flung into our hands.

“Should we try the dragons instead?” my dad said. The worst had happened. My courage flooded straight back. “Sure,” I said, happy with our story to tell.