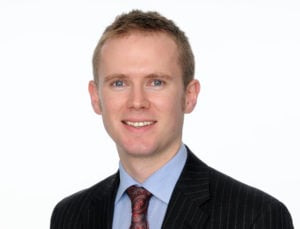 The ‘Drama In Real Life’ section of his mother’s Reader’s Digest first got David hooked on ordinary people who experience extraordinary things. During ten years as a writer and editor at national newspapers he was privileged to meet many fascinating interviewees, from alien abductees and cult escapees to the last living survivor of the Titanic disaster. Formerly shortlisted for the Society of Editors Interviewer of the Year, David now works as a freelance copywriter for corporate clients.

As a Story Terrace writer, David interviews customers and turns their life stories into books. Get to know him better: you can read an autobiographical story of his own below. Get in touch today to work with him!

North Antrim is the closest Northern Ireland gets to a ‘sunshine coast’. While the weather frequently put a dampener on the two or three weeks we spent there courtesy of my grandparents each summer, it’s where some of my most vivid and happiest childhood memories were formed.

Awaking later from my lie-in, the savoury smell of frying bacon sometimes carried to the cramped bedroom, where I lay curled in a sleeping bag, suddenly wide awake in anticipation of a cooked breakfast. There was no time for such luxury during the school term, but on holiday Mum went the extra mile, despite the limitations of the pokey caravan kitchen. Water was slowly boiled over gas in a kettle that gave an ear-piercing whistle, bread was toasted under the oven grill and eggs were poached in round moulds that made them look like giant mint sweets. A knife through the white would send a jet of the hidden yellow yolk oozing to the plate, and I’d quickly scoff the lot ahead of another day of fun.

Naturally we spent many of those days at the beach, where a wind-breaker was an essential piece of kit and the best ice-cream van offered lime and strawberry flavoured syrups. When the Radio One Roadshow rolled into town, I got Phillip Schofield’s autograph and watched two dark-haired twins from Neighbours mime to a track that didn’t quite secure them a place in pop music’s Hall of Fame. Once a minke whale washed up on the golden sands of Portstewart Strand, but died before it could see the thousands of curious onlookers that gathered to gape at its vast black hulk. I was fascinated by the smooth plastic-like texture of its skin, but rather less taken by the smell of the decomposing carcass. The hottest days were rounded off with glorious, velvet-red sunsets, which could compete with any I’ve enjoyed since in more exotic locations, including India, the USA and Australia.

Sadly the caravan was sold long ago. Nana and Granda McMillan have passed away. They gave me many gifts over the years, but the most precious are those carefree caravan summers, when days began with the drumming of rain on the roof.