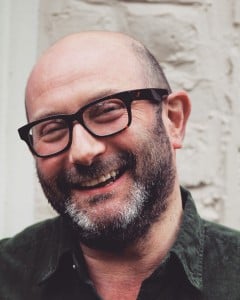 Based in London, Chris works in a variety of fields. As a comedian he performs stand-up, appears on the radio and works as a voice actor. Mainly, however, he writes. Chris’ writing life is varied: he writes national newspaper columns, magazine articles, television animation scripts, his own radio comedy series, and (like most people with a Twitter account it seems) he’s also working on a book. In a previous life, Chris was a BBC Radio Comedy producer making sitcoms, sketch shows and panel games. He loves cooking and reading, and although he’s lucky enough to have a garden, the thought of doing anything in it is always off-putting.

As a Story Terrace writer, Chris provides professional ghostwriting services to capture customers’ life stories through carefully crafted anecdotes. Below is an anecdote of his own. Get in touch today to work with him!

One extremely hot day about 10 years ago, at his brother-in-law’s funeral, a man approached my uncle. “I thought you were dead,” he said, laughing as he slapped my uncle on the back. “I could have sworn someone told me you’d croaked.”

We all stared at this bloke, and he seemed surprised by the attention.

“No offence,” he offered, and slapped my uncle again. This time on the upper arm.

There must be people who are used to be being stared at. For their fame possibly, for their beauty or astonishing dress sense. (Walking through Selfridges once my long-dead grandmother spoke using my mouth. “You do see some sights, don’t you?” she said.) But this man was being stared at for confusing the living and the dead at funerals.

Travelling along Oxford Street on the 94 bus recently, I was mesmerised by the man sitting across the aisle from me. Bald now for some years, I often wonder what it might have taken for me to feel I could improve things by donning a hairpiece? I am still to find an answer.

This man’s wig was so outlandishly terrible it could barely be construed as an item aspiring to be taken for a human’s head of hair. A mere six degrees of separation would struggle to make a connection between the thing crouching where a hat might more sensibly have existed and anything whatsoever a human’s body could feasibly produce without biological warfare playing a role. Its only redeeming feature was that where it was supposed to make contact with the back of his neck, it instead stuck out leaving a tantalising darkened gap. A space which brought the word ‘eaves’ to mind. How I hoped a family of blue tits or ducks might have found a place to nest in there. At least some good would have come of it this way.

That night, as we scooped up hummus, falafel and yoghurty kebabs I told my friend Karl about all this. Supposedly, we were both on a diet, and I wanted to distract us from the pungent garlicky guilt which accompanied our meal. Having undergone chemotherapy, Karl knows what it’s like to lose your hair. But as I showed him the surreptitious snap I’d taken on my phone, even he couldn’t find an excuse for this monstrosity.

At the end of the meal, as we knocked off the icing sugar on our complementary Turkish delight by way of showing commitment to our weight loss regimens, the question hovered, still unanswered.