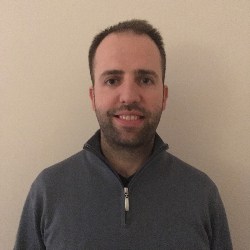 In over a decade in journalism, Chris has interviewed figures ranging from cabinet ministers to notorious gangsters. After completing his degree in history at Edinburgh University, he studied Russian in the hope of becoming a foreign correspondent before deciding he really rather liked living in Scotland. He has written for newspapers including the Scotsman, Scotland on Sunday and the Sunday Herald on everything from travel to crime and politics.

As a Story Terrace writer, Chris interviews customers and turns their life stories into books. Get to know him better: you can read an autobiographical story of his own below. Get in touch today to work with him!

The night porter takes a swig from his can of super-strength lager as I approach the desk. It’s late, but I’ve been travelling for days and my circadian rhythms have become syncopated. I arrived at Belorussky Station at around 4am and after an hour of attempting to navigate Moscow’s darkened streets, I’ve ended up here – a fleapit motel on the edge of a bus station.

“I need a room,” I venture in my halting Russian.

“Two thousand rubles,” he spits, the equivalent of around £40.

The porter hands me my key and tells me where I can find my accommodation for the night. There’s no shower, but I’ll be able to borrow one in another room tomorrow once its guest has checked out, he informs me.

Buoyed by my modest linguistic success, I decide to push my luck. I’ve been travelling for two weeks and my limited wardrobe could use a clean. I ask where the nearest launderette is, only I’ve forgotten the necessary Russian word. He looks at me blankly as I attempt to act out the washing of clothes and pull faces of disgust when I pretend to sniff my own armpits. Again, this fails to register and I sense his patience is wearing thin: I am after all keeping him from his beer. I give up my attempt at charades and instead sketch a very rudimentary picture of a washing machine on a pad lying on the reception desk.

A sudden look of recognition flashes across his face and he smiles. He takes the pen from my hand and begins to draw a rather detailed map of nearby streets, showing me the way to the nearest launderette. I thank him and wish him goodnight.

The following morning, after a fitful night’s rest, I take out the folded-up piece of yellow foolscap. The map is as detailed as the directions are accurate. After around 20 minutes of walking, I come to my destination: an electrical shop selling washing machines.