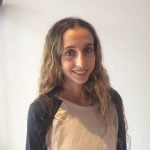 Charlotte’s love for words began young, with a weekly subscription to The Beano comic book. But it was only after swapping “chortles” and “kapows” for Spanish and Latin literature at Cambridge University that she cemented her life-long love for literature, and its power to transport, transform and immortalise. After completing an MA in Journalism, she became a news and features writer for a local newspaper, and has since turned freelance. She has been published by The Times, the Guardian, Woman, EasyJet Traveller, Now, You and The Jewish Chronicle; and, when no one is looking, she still picks up the odd comic book or two (chortle chortle).

As a Story Terrace writer, Charlotte provides professional ghostwriting services to capture customers’ life stories through carefully crafted anecdotes. Below is an anecdote of her own. Get in touch today to work with her!

The air is thick with slumber and sweat as the clock strikes six. I wrestle my way through the cobweb that is my mosquito net, and head to our shala, or main practice area.

We have been told to wear white, making my contemporaries’ faces blur further in my still-sleepy vision. We are given flower garlands to wear around our necks and led to join the semi-circle forming.

I sit and touch palm to palm as our teacher begins. He lights a small fire in the centre of the class, while a shaman recites mantras. A red dot is painted on each one of our foreheads, and we approach the flames in small groups.

We then throw small pinches of dried herbs into the embers, ceremoniously letting go of the old and opening ourselves up to something new.

Suddenly, I feel very awake. Thoughts turn back to the life I have left.

“India? Really?” The scepticism etched a furrowed line across my editor’s brow when, four weeks earlier, I handed in my notice. “Is there anything I can do to convince you to stay?”

I steeled myself and politely declined, while trying hard as I might to avoid the puddles of panic in my path.

Always, always, I had wanted to travel to India and train to become a yoga teacher. But now that the course was paid for, the flight was booked, and my steady job in journalism – however steady a job in journalism can be – was coming to an end, the doubts were deafening.

I incinerate this memory, and so many others, as I throw chippings into the open flames.

One month later, I am repeating the ceremony – this time, to mark my graduation, following weeks of rigorous physical and mental exertion.

As the sun makes its final retreat, my contemporaries and I step away from the flames and stalk it to the beach.

The air is thick – just as it was a month ago; a heavy haze of heat and sweat. But it no longer suffocates. It feels cleaner, purer, crisper.

I couldn’t tell you how or why, but the air is very different today to how it was when I arrived. And so am I.