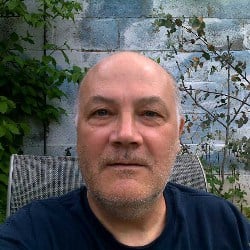 Brian has written most things in a three decade career, from two-paragraph press releases to 80,000-word autobiographies, and most in between. Trained as a teacher at Newman College, Birmingham he went on to interview many of the giants of football, from George Best to Pele and many in between. He is the longest serving freelance Sky Sports football reporter, having covered nearly 1,200 games. His hobbies include football, writing, a good movie and the spectrum of humour from Morecambe and Wise and Les Dawson to MASH, and not a lot in between.

As a Story Terrace writer, Brian provides professional ghostwriting services to capture customers’ life stories through carefully crafted anecdotes. Below is an anecdote of his own. Get in touch today to work with him!

When I wrote my first ever football match report it concerned the 1967 Home International match between Northern Ireland and Scotland. It was a one-man demolition of the Scots carried out by the most talented footballer ever to emerge from these shores – George Best.

Little could I ever have imagined that one day I would have the pleasure and honour of being George’s ghostwriter. That honour produced not only a unique gift I treasure, but also the greatest compliment paid to me in my career as a journalist, broadcaster and author.

George Best had agreed to produce a syndicated newspaper column and whilst the circumstances that led to my involvement are shrouded in the mists of time, what followed is as clear as the first day I met up with George.

His girlfriend at the time, Mary Shatila, agreed the deal with me and George and left us to get on with it. Unfortunately, George`s reputation for failing to be where he should when he should proved well earned. Time after time I had to be `George Best’ so his column could reach its destination on deadline. It worked. So much so that Mary later told me, and I quote: “No one has ever been able to get inside George`s head as well as you Brian.”

WOW! I was on cloud nine.

The altitude was even higher when a surprise package dropped through my letter box some time later. It was the latest biography of the Maverick Irish superstar, The Good, The Bad and The Bubbly. What made the book so special was what George had written inside the cover:

The amazing thing is, in all the years I have treasured the book I never noticed that there was a price sticker on the inside of the dust jacket indicating it was purchased in Fitzmaurice bookshop, Tullamore.

So George, who could have had any number of books from his publisher, gratis, bought and paid for one especially for me. 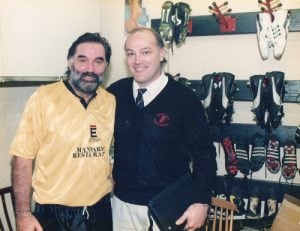