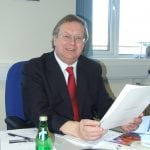 An award-winning Fleet Street journalist and BBC broadcaster with many books published including autobiographies for a number of celebs. A very experienced interviewer and speaker who has worked with household names as well as ordinary people with a tale to tell. Bernard has appeared on many television shows, twice compered at the Royal Albert Hall, twice spoken at the Houses of Parliament and had many other major engagements. His secret is in being a people person and respecting client confidentiality – as well as being good at what he does.

As a Story Terrace writer, Bernard provides professional ghostwriting services to capture customers’ life stories through carefully crafted anecdotes. Below is an anecdote of his own. Get in touch today to work with him!

I always said that I would use that as the title of my own autobiography if I ever felt that there was enough interest to write one.

It came about because I had been speaking at a theatre engagement and a Danish gentleman told my mother-in-law that he thought I was very good. My mother-in-law, not wishing to hear too much praise of my limited talent told him: “Well, he should be all right, he has been writing for years, had his own BBC shows, coaches people in giving speeches and all that kind of thing.”

“Oh,” said the Danish gentleman. “So, he is almost a professional.”

So, I thought that would make a good title for my own story which would include my early years of growing up in London’s East End in the immediate aftermath of World War Two, writing from an early age, working as a young reporter at the Daily Express from the age of 15, working on the Profumo case and other investigations, once stepping on the toes of Muhammed Ali – for which he apologised – hob-nobbing with stars, getting attacked by a group of chimpanzees and crossing swords with politicians and other stalwarts of society. Oh yes and getting to hold the World Cup after England won it in 1966!

It is a roller-coaster ride of a life story, full of gasps and more than a few screams. Amazingly it is still going on and infinitely better than the ghost train. 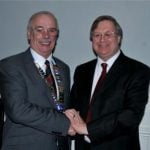