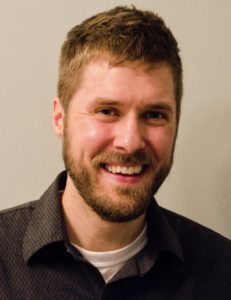 Derrick started his career in writing when a newspaper editor at his first job out of college told him to “go out in the community and find a story.” Since that time, he’s worked as a freelancer, general assignment reporter, columnist, news editor, and managing editor at various publications in Minnesota. He has a decade of writing experience and has completed myriads of in-depth features on everyone from fifth graders to a 105-year-old woman.

As a Story Terrace writer, Derrick interviews customers and turns their life stories into books. Get to know him better by reading his autobiographical anecdote below.

I thoroughly searched my apartment for quarters—I transferred dozens from a glass bottle I kept in my closet to a plastic ziplock bag. I found four or five more in my nightstand drawer. Into the bag they went. Lastly, I searched my car and discovered about another half dozen quarters in the center console, some with a crisp new glean, some mottled by time. I’d wrangled up enough quarters to fill the sandwich bag to the top.

I put my key into my car’s ignition, but just prior to backing the little red hatchback out of its parking space in front of my apartment complex, I looked at myself in the vehicle’s rearview mirror. “What am I doing?” I said to myself. “I don’t get involved in stories; I report on people, and that’s it.”

I tried further to convince myself I was a completely objective journalist, one who is not affected by the gut-wrenching circumstances on which I had to report. I failed. I stuck the car in reverse, zipped out of the parking space and headed to the apartment of a little old lady I had met about a month prior.

When I got to the building, an unassuming senior living facility with a façade composed of cream-colored siding and light-brown brick that was caked in white from a fresh January snow, I quickly exited my car and headed into the building. I rang the woman’s apartment from the building’s main entryway, and she promptly unlocked the door. I briskly walked up two flights of stairs to her apartment. I knocked, and the woman, who was in her 80s, about five feet tall with a tight gray perm, opened the door, her eyebrows scrunched together in a look of confusion.

“What are you doing here?” she asked.

I fumbled over my words and handed her the bag of quarters. I had recently written a story about her homeless granddaughter and her trio of young girls who were all under the age of five. At one point during the course of my interviews with the family, the grandmother told me they didn’t even have enough money for laundry.

I didn’t know what I expected when I handed her the quarters; I just wanted to do something to help. She didn’t ask me what the quarters were for. She simply hugged me and started to cry.

Get in touch today to work with Derrick!