Craig is a writer whose work has appeared in magazines like Fast Company, Entrepreneur, and Forbes. He has ghostwritten for major companies and for the coffee shop and art gallery owner down the street. He has ghostwritten written everything from 600-word articles to full-length books. When he’s not writing, he enjoys travel, hiking, finding great restaurants for going out, and new ingredients to try in cooking when he and his wife are staying in.

As a Story Terrace writer, Craig interviews customers and turns their life stories into books. Get to know him better by reading his autobiographical anecdote below.

From Home Alone to Some Kind of Wonderful

It was a spectacular year. There was the choir trip to New York and Vermont, Senior Week spent with friends at the Jersey shore, literally washing somebody’s airplane to make money for the prom limo, dance parties, pool parties…Not quite Ferris Bueller, but I had a pretty good senior year of high school.

By all accounts, it should have been much different, a terrible year of challenges I never asked for. My dad got a new job the July before my senior year, so we had to sell our house and move. Not just around the corner or across town, but across the country, from sunny metropolitan Phoenix, Arizona to rural southeastern Pennsylvania. How could my parents tear me away from all that was familiar – in my senior year?!?

Those first few weeks were terrifying, not knowing anyone, not knowing anything about the rural area I was living in, no sidewalks to skateboard on – pure teenage culture shock. In that first month living in “East Podunk” Pennsylvania, I was in the beginning of a John Hughes film, where I was a forgotten, mistreated, not-one-of-the-cool-kids teenager.

I don’t even know quite how it happened, but I found my people, really great friends, some of whom are friends to this day. Somehow as the “new kid from Phoenix” I was an exotic discovery, like the Wild West itself. More amazingly, people who had grown up together since kindergarten found room to include me, not just treat me as an exotic oddity.

There were lots of firsts: first car, first girlfriend, first trip to New York City (where I would later spend my first two years out of college). It was like the end of a John Hughes movie, and we literally cranked up the song “Pretty in Pink” as the limo pulled up to the prom venue.

People are still shocked when I tell them my parents moved me across the country my senior year. How could they do that? Well, we needed to eat, and even though it could have gone in a very different direction, I got to experience a whole new region of the country, learned how to adapt, make friends, and ultimately had an epic year. 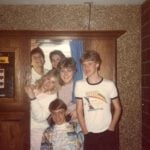 Get in touch today to work with Craig!