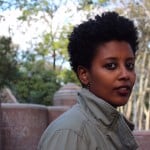 Bsrat is on her second life. After working as a consultant on projects funded by the World Bank and United States government in Eastern Europe, the Middle East, and Africa, she is now getting her MFA in Creative Writing at New York University and working on her first novel. She is happiest at a concert, over a plate of Thai food, and with her nose in a book. Raised in Washington, DC and residing in Brooklyn, Bsrat feels at home in many different places.

As a Story Terrace writer, Bsrat interviews customers and turns their life stories into books. Get to know her better by reading her autobiographical anecdote below.

We are in a luxe gift shop in Saint Croix. My father has an afternoon off from his conference and can finally play tourist with me and my mother. She is in the furthest part of the store, staring intensely at a salad plate she is holding high above her head. She looks triumphant, as if God has revealed himself right there in its surface. But it’s her hand that she’s found, the shadow of her fingers visible through the plate, proving that she’s gripping fine bone china and not lowly porcelain.

My mother, the same woman who recycles Ziploc bags, only shops the sale racks, and has never bought me brand-name sneakers, does not compromise on plateware. In her estimation, it reveals as much about a woman’s pedigree as the cleanliness of her bathrooms or the quantity of the 24-karat gold bangles on her wrist.

In the back of this store, where she has found more paradise than on the sugar-soft beaches, she runs her fingers over countless teacups and serving bowls. Tche. She sucks her teeth. It is a sound of relief, of something being done right, the universe presenting her with exactly what she wanted. She holds up a dinner plate with two thin bands of black and gold circling its edge. “This is the one,” she says out loud. “When you get married, we’ll use this china. We won’t touch it until then.” I am ten years old.

Get in touch today to work with Bsrat!