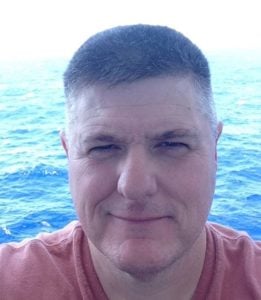 Bryan is an award-winning journalist, columnist, and photographer who honed his storytelling expertise making up bedtime fairy tales he shared with his three daughters during their childhood. He became a reporter because he wanted to be on the front lines of history, and he sincerely believes everyone has a fascinating story. Bryan has since left the world of journalism and dedicates himself these days to writing articles for magazines and legal blogs, and traveling around Texas to taste the wine and encounter the most interesting people in the world.

As a Story Terrace writer, Bryan interviews customers and turns their life stories into books. Get to know him better by reading his autobiographical anecdote below.

“You are your daddy’s spittin image.”

It seems that for all of my years on this blue marble called Earth, that someone, albeit a friend or a stranger, would look at my dad, then at his miniature twin standing nearby, and exclaim this as if they’d come up with it all on their own.

What boy doesn’t want to hear how much he resembles his hero? It was indeed something I never in my years, ever grew tired of hearing.

I idolized dad, and I wore button-up shirts and a clip-on tie hoping this would help me be like the man who’d passed his looks onto his firstborn son.

The kids in my daycare class thought it was funny, and one kid my age cleverly dubbed me “Mr. Whiskers,” because, he said, “You think you’re old, but you’re really not.”

It was a nickname I carried with pride that first year of daycare class.

No one ever called me Mr. Whiskers again, once I left that world of daycare and went on to elementary school, but everyone still told me I favored my dad.

As I grew older,our relationship changed. The days of him wanting to play catch waned, and I would find him sitting quietly at the dining room table, glued to a Zane Grey western, or something by Tolkien.

That was how it would be until I grew to adulthood.

We got closer again when I was in my 30s, and that’s how it remained. I had my last conversation with him on May 19, 2006, the day before he died, and I knew it would be the last one here on Earth.

Get in touch today to work with Bryan!