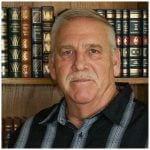 Bob grew up in South Texas, the youngest of three sons to a firefighter father and homemaker mother. The family took vacations every summer, traveling all over the United States to visit places such as state and national parks and historical sites. During his twenty-year military career and later while working overseas, he continued to travel and learn about the history and cultures of the people and places he visited. It was during this time he began writing about the places he’d visited, the people he’d met and launched his freelance writing career, ghostwriting for corporate clients and writing for online and print magazines.

As a Story Terrace writer, Bob interviews customers and turns their life stories into books. Get to know him better by reading his autobiographical anecdote below.

A Little Slice of Sanity

Living and working for over three years in the walled off and guarded section of Baghdad they called the “Green Zone” was like living in another world. Just outside the walls and security checkpoints, the chaos of life and death in Baghdad went on day by day.

Inside the protected enclave, life wasn’t much different. Thousands went about their daily duties never knowing when the sounds of blasting alarms would announce incoming rockets and mortars. Living in small 10×30 foot metal containers, one never knew when an attack might occur, waking you up, interrupting a shower, or catching you in the open walking to and from work.

After a while, the mayhem so foreign to relatives back home became just another way of life. Working twelve hours a day, six days a week, we began looking forward to Friday when we could relax a little, unwind from the previous week, and do something normal.

Normal became our Friday BBQ: a ritual between my roommate Curt, my best friend Matt, and myself. In good military fashion, we all had our specific duties. Matt was in charge of buying the meat, Curt and I would gather vegetables and drinks, and I would do the grilling.

Being at the mercy of what the Post Exchange had for sale, sometimes Matt would bring pork chops or it might be steaks or even hot dogs. Having bought the right grilling spices online and having them shipped to Baghdad, we were all set.

For a few hours each Friday we grilled, enjoyed the fact we could relax, talked and traded stories from the previous week, and had our normal day. A normal day for us though always had the potential of being interrupted at any time by those damn sirens announcing incoming rounds.

Although we lived and worked under stressful circumstances and had to duck and dodge the occasional incoming round, it was those Friday BBQs that I remember fondly. It was our little slice of sanity. 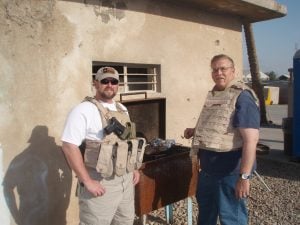 Get in touch today to work with Bob!