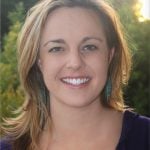 Allison is an editor and writer who enjoys music, art, literature, food, and talking with strangers. Allison graduated as salutatorian of Pepperdine University with her BA in English Literature and minor in Humanities. She then earned her TEFL certificate in Barcelona and traveled extensively around Europe. She has worked in various editing-related capacities at several companies, including Sage Publications, Penguin Random House, John Wiley & Sons, Cydcor, and FP Horak.

As a Story Terrace writer, Allison interviews customers and turns their life stories into books. Get to know her better by reading her autobiographical anecdote below.

When I was four years old, my mother’s youngest sister, Aunt Terri, got married in a large church in Southern California. My cousin Danny, who had just turned five, was to be the ring bearer while I would be the flower girl. The whole family was excited for the big event, and I was thrilled to be playing a key role.

Donning my flowing, peach-colored dress on the day of the wedding, I felt ready for my big day. I remember Danny’s dad, my uncle Jerry, taking us both aside that morning before the ceremony began. He led us to the front of the church and showed us two quarters, discreetly taped to the ground, one on each side of the stage.

“If you do a good job as the ring bearer and flower girl, you’ll each earn a quarter,” he said. “But if one of you misbehaves, the other will get both quarters.” A very competitive child, I was certain that I would get at least one quarter if not both—Danny was always getting in trouble, so far as I’d seen, whereas I was rarely caught.

Aunt Terri’s wedding, however, proved to be a revelation to me. Starting with my uncomfortable hairdo—my mom had carefully braided it only to have me complain and yank at it—and not ending at my displeasure at the itchy seams of what had previously seemed to be a dress fit for a princess, I walked down the aisle to stand at the back of the procession without incident.

I quickly became bored standing there, though—I could hardly see the couple getting married, and I was hungry to boot. So I walked down the steps of the stage and dropped my bouquet at the feet of my dad, who was sitting in the front row. He was visibly upset, but I ignored him and went back to my post.

Soon, though, my foot itched. I sat down to itch it and realized I’d prefer to sit with my very pregnant mother, who was also on stage. Stooped down behind a wooden pulpit she’d been standing at in preparation for her upcoming solo, she frantically gestured at me to go back to my place. I remember her whispering, “You get back there, Allison!” Unfazed, I decided to continue on, stubbornly crawling across the stage steps until I reached her. She quickly dispatched me to sit with my dad, which I did without delay, and Aunt Terri’s wedding went on without any further glitches.

Needless to say, Danny left $0.50 richer, and that was the first and only time I served as a flower girl.

Get in touch today to work with Allison!